The Future of Google Docs 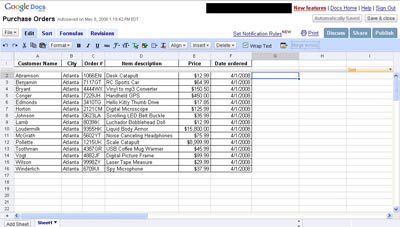 Users can create spreadsheets and collaborate with others using Google Docs.
2008 HowStuffWorks

Google's almost as silent about its future plans as it is about its hardware. But again, there are many safe assumptions you can make about where Google Docs is heading.

For one thing, you should expect to see Google add more functions and features to all three of the major applications within Google Docs. Google developers are constantly tweaking the system. By adding features, Google can close the gap between its services and the more complex desktop productivity software applications on the market. This can include everything from new presentation slide formats to new spreadsheet formulas.

Another goal is to enable a feature that lets users work on spreadsheets and presentations while offline. These files can be more complex than document files. As a result, it's more challenging to resolve discrepancies between multiple users as they make edits offline. Imagine if 50 collaborators working on a spreadsheet were to work on the same file offline at the same time. Syncing back up to the system could be a disaster! Development teams in Google are working on ways to make offline editing not only possible, but also efficient and easy to use.

Google encourages a community of independent developers to find new ways to use the company's various applications. With that in mind, we'll probably see new Google gadgets -- applets built on Google's application programming interface (API) -- incorporated into Google Docs. Some of these might be entirely new applications, while others might combine existing applications with Google Docs. The common term for applets that combine two or more other applications is a mashup.

There are already hundreds of Google gadgets available right now, and developers are constantly creating more of them. Here are just a few gadgets and ways they might one day be integrated with Google Docs:

That's just a small sample of the gadgets available from various developers. With Google's community of developers, it's not unreasonable to say that if you can imagine a particular feature in Google Docs, someone is working on it right now. It's just a matter of time before we see it in action.

Want to learn more about Google applications and cloud computing? Take a look at the links below.