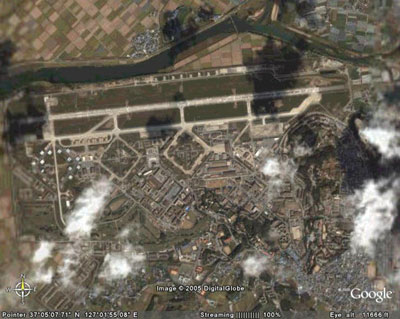 Google Earth makes aerial photographs of every square inch of the globe readily available to anyone with a computer. People have raised concerns about this fact on a couple of different fronts.

Google Earth elicits powerful responses from people the first time they use it. One common response is sheer awe and joy at the dramatically increased access to the world. Another one, which usually immediately follows the first and has to do with the human urge to look up one's own address, is, "Oh, that's kind of creepy." While most people love the idea of viewing the world on their computer, they don't love the idea of the world viewing them. Could someone use Google Earth to more effectively stalk a target? Could burglars use Google Earth to case an area?

There are a couple of things to note when considering personal privacy concerns. First, the information on Google Earth is already available elsewhere; and second, the imagery is up to three years old. No one is viewing satellite data in real-time using this application. Three-year-old data is arguably not very useful to a stalker.

Other worries about the program focus on national security. Officials in numerous countries have voiced concerns over the level of detail available in the Google Earth application, including Australia, Britain and the United States. After all, terrorists could arguably make use of an application that supplies detailed satellite imagery of the globe. But the most vocal opponent of Google Earth by far is South Korea. South Korea is technically still at war with North Korea and is very upset that any North Korean Tom, Dick or Harry can view South Korean military installations with the click of a button and a little zoom.

Realistically speaking, if Google can get its hands on this data, then North Korea probably already has it. In any event, it's worth noting that anyone in South Korea can zoom in on North Korea's nuclear research facilities. Google Earth makes spying child's play.

The imagery offered by Google Earth is nothing new -- Google gets its data from other sources, after all. But the packaging is revolutionary. It no longer takes intensive research to track down a satellite image of the Egyptian pyramids or of the White House. It takes no research at all. All you have to do is download Google Earth and you've got a bird's-eye view of the world.

For more information on Google Earth and related topics, check out the links below.