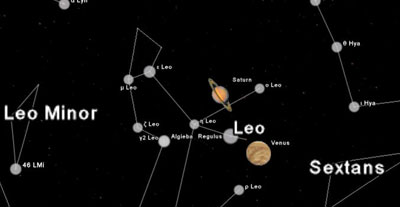 Google Earth wows users with its ability to fly to and from anywhere on Earth. In August 2007, Google introduced Google Sky, giving users the ability to actually take to the stars.

With one click of the mouse, a Google Earth user can switch to Sky Mode and reverse the perspective. With hi-res images from NASA, the Digital Survey Consortium and the Sloan Digital Sky Survey, Google Earth has put together an accurate and fascinating look at outer space. Users can fly around, just like in Earth mode, to search the far reaches of space.

As with the Earth portion, Google Sky has lots of layers you can display. You can find constellations by name or see them drawn out on your screen. The Backyard Astronomy layer references three astrological catalogs to give greater detail on some of the more well-known space objects. You can highlight galaxies, nebulae, star clusters and famous visible stars to get information on location, history, classifications and even links to NASA's database of information. There is also a Hubble Showcase that provides images taken from the Hubble Space telescope, along with some detailed data about the objects.

­Two very cool features of Google Sky are the Moon in Motion and Planets in Motion layers. These show the paths of the moon and the planets across the sky from your given location on Earth. NASA took pictures once every hour for three months to make sure the paths were accurate. A slider bar lets you choose the span of time you want to view. Then, you just click to see the moon or planets move. If you click on the moon itself, the program pinpoints its location on that date, the phase, how far it is from Earth and how bright it may look in the sky. Click on the planets, and you can find out their size, distance and magnitude.

Google Sky also provides two very interesting tours of outer space. The User's Guide to the Galaxy takes you on a trip through a number of well-known galaxies. The Life of a Star tour shows the lifespan of a typical star, from birth to death. A fact list shows what happens to each star and how it fits into the cosmic soup. In both tours, you can e­ither click on one at a time, or download it for one long trip through the universe.

Now that you know all the cool things you can do with Google Earth, let's find out where it gets all the data to make it work.

The latest version of Google Earth includes a flight simulator. Click on the option under Tools and choose between an F-16 fighter jet and the SR22 propeller plane for a more leisurely ride. After that, choose the initial airport and you're ready for takeoff, or more likely, a crash landing. The simulator is joystick enabled, but can also be used with keystrokes and your mouse. It's fairly simple compared to full featured simulators, but still a lot of fun to play with and perhaps only the tip of the iceberg for what Google Earth may one day become.