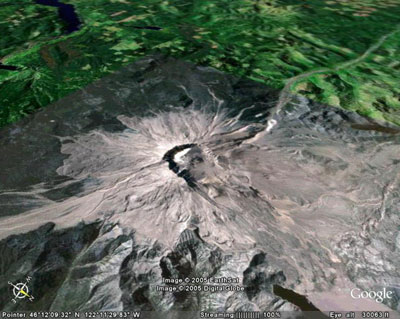 Google Earth was once a premium program called Keyhole that cost about $90. When Google purchased Keyhole, it inherited terabytes of digital mapping data and set about creating a basic version of the software that would be available as a free download. Now you're all caught up.

The photographic maps available on Google Earth come primarily from two sources: satellites and aircraft. Google gets this imagery and other digital mapping information from sources such as TeleAtlas and EarthSat, both of which compile photographs and maps into digital form for commercial applications. Because the data comes from different sources, it's provided at different resolutions, which is why some areas of the globe appear crisp even at street level while others are blurry from a great distance. Google is striving to have as much high-definition coverage of the world as possible. When you use Google Earth, you're not viewing the imagery in real time: according to Google, the information is no more than three years old and is continually updated as new data becomes available.

Google Earth has several countries like the United States, Canada and the United Kingdom covered to street level, so you can zoom in and view road names and local businesses and get directions from here to there. The database has a good amount of information on other regions like Western Europe, India and Japan as well, but the rest of the world is hit or miss. While you can zoom in and get a pretty good look at the Egyptian pyramids, you can't see street names or find a grocery store in the area. Google is constantly adding more information to its databases, though, and the maps are getting better with each update.

Now that we know where the data comes from, we'll learn about what it takes to get that data to your computer screen.