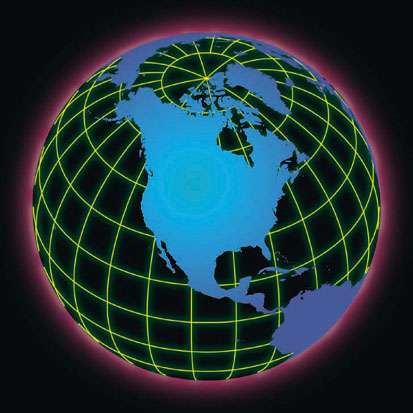 Virtual globes are actually made up of polygons.
Stockbyte/AFP/Getty Images

When using Google Earth, people can take for granted the ability to zoom in, rotate, pan and tilt on an image as specific as their own front yard. But the trick of Google Earth is not in compiling and storing all these images. It's getting them to your computer quickly and efficiently. With a 56k dial-up modem, it would take 12,400 years to download a one-meter resolution image of the Earth [source: Butler]. But Google Earth makes it seem like a high-resolution picture of the entire world is right in front of you. Figuring out how to move so much information was one of the program's biggest hurdles.

One way to cut down on transfer time is by using your computer's disk cache. You can explore the details about disk caches in How Caching Works. For now, let's simplify things and define disk cache as temporary storage for files your computer has already accessed. If your computer can temporarily store viewed images of the Earth, it won't need to retransfer the images from the source when you want to view them again. Google Earth counts on this technology to help speed up transfer time.

Another key to getting all that information on your screen has to do with how your computer processes and displays maps. Google owns several software patents that relate to how Google Earth functions. The one patent that really makes the whole thing possible covers something called Universal Texture. Universal Texture (UT) uses two methods for getting large amounts of information to your computer -- mip mapping and clip stacking [source: Tanner, Migdal, Jones].

Mipmaps are collections of bitmap images that work within a texture to create the illusion of depth. They work in an inverted pyramid structure, stacked on each other with each level having twice the resolution of the one under it. These stacks ultimately create a three-dimensional representation of a two-dimensional image.

Clip stacks are portions of giant mipmaps that are clipped to a specified maximum size. The benefit of clipping these enormous files is simple -- Google Earth relies on the fact that users will only need to see one piece of the mipmap at a time. When the user tells the program where they want to fly, the program uses an algorithm to figure out which sections of the larger virtual texture are needed and uses only those sections to create the final images [source: Tanner, Migdal, Jones].

Simply put, Google Earth has created a giant, multi-terabyte, hi-res image of the whole Earth and serves it up one small piece at a time in bites your computer can easily digest. Zoom in to your front yard, and the program clips away everything but the front yard and its surrounding area.

Now let's get back to playing with Google Earth. In the next section, we'll learn how Google Earth can be customized.

More About the Technology

Avi Bar-Zeev was one of the founders of Keyhole and had a hand in writing the original "Earthviewer" program that would later become Google Earth. He has a more detailed look at what makes this technology possible on his Web site.