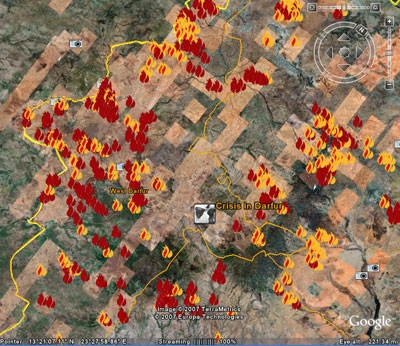 One of the factors that makes Google Earth stand out from other mapping programs is the level of customization it offers. You can easily insert placemarks of locations you want to return to or overlay your own images on a map you create. It's all right there in the toolbar. And if you want to get really fancy, you can import your own files into Google Earth to display routes, points of interest, boundary data, et cetera. Much in the way an Internet browser reads HTML, Google Earth reads a language called KML. You can open your own KML file in the Google Earth application and see your data displayed on the Google Earth imagery. To learn about importing your own data, check out these links:

Google Earth features third party overlays and applications from time to time, including overlays sponsored by the Discovery Channel, National Geographic, the European Space Agency and many other organizations. Layers can highlight natural wonders, impressive achievements, environmental efforts and political issues. The following are just a few examples.

Crisis in Darfur -- an overlay developed by the United States Holocaust Memorial Museum that maps out the genocide in Darfur. When you activate the overlay, the Darfur region in Sudan is outlined on the globe. Markers appear where the Sudanese soldiers and Janjaweed militia have destroyed villages. The markers also tell you how many people were displaced as a result of the destruction of each village. The overlay includes images, video and articles about the ongoing crisis.

Geographic Web Layer -- a layer with three sub-layers: the Best of Google Earth Community layer, the Panoramio layer and a WikiPedia layer.

Read on to learn about more ways that you can customize Google Earth.