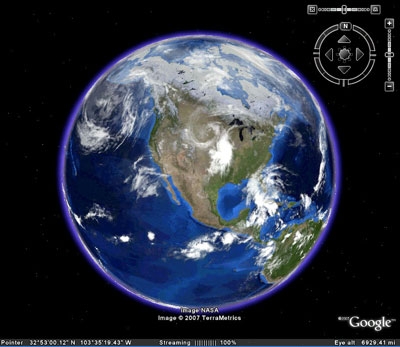 Wild Sanctuary -- an overlay that lets you listen to soundscapes collected by Bernie Kraus. He gathered sounds from locations across the world in climates ranging from tropical rainforests to the Antartic. When you click on a marker, a pop up window appears and the collected sounds begin to play. You can turn the sounds off by closing the pop-up window.

NASA -- the space organization has created a few interesting applications for Google Earth. One allows you to view satellite images of Mars, effectively turning your Google Earth into a Martian globe. Another is the Blue Marble Next Generation application, which creates a beautiful image of the Earth from space. It activates when you zoom out to view the Earth as a globe and switches back to regular satellite view once you zoom in through the atmosphere. It also includes the option to turn on a real-time Global Clouds overlay, which is updated every few hours. Note that only the cloud layer is updated; the land images beneath the clouds will still be up to three years old.

ChartGeek and EarthNC -- ChartGeek is an overlay of Sectional Maps and TAC charts, used by pilots. In a similar vein, EarthNC Plus is an application from DestinSharks.com with a layer of over 600 nautical charts. These charts are probably not a good replacement for physical documentation, but can be very useful for planning flights or cruises.

Other layers let you compare before and after pictures of regions affected by extensive changes. For example, you can view satellite images of Greensburg, Kan., before it was leveled by a string of tornadoes and compare it with pictures taken after the devastation. Users have also created animations using Google Earth to show how a region changes over time or how massive flooding due to climate change could affect a city.

Google Earth is arguably the greatest free download available right now, and most people are thrilled with what it offers -- most, but not all.