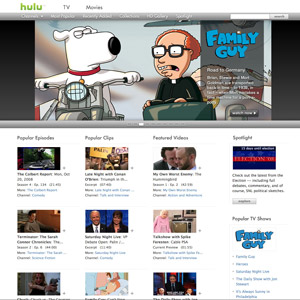 Use the many links on the Hulu main page to browse and find videos. See TV evolution pictures to learn more.
Image Courtesy Hulu.com

At any time of day, anywhere in the U.S., you can watch network television shows, feature films and video clips in your Web browser using a free online video service called Hulu. You can access videos at Hulu.com or at one of the sites run by Hulu distribution partners like AOL, MySpace, and Yahoo! Hulu features professional quality video from more than 150 providers, including Fox, NBC Universal, Sony Pictures Television, Warner Brothers and Disney [source: Kilar]. Grab a quick laugh viewing recent sketches from "Saturday Night Live," or settle in to enjoy any of more than 1,000 current primetime TV series like "House" and "The Colbert Report," classic shows like "The Partridge Family" and blockbusters like "Ghostbusters."

NBC Universal and News Corporation jointly launched Hulu on March 12, 2008. Since its launch, the site has continuously expanded its list of content providers to give you more viewing choices. Before the end of 2008, Hulu boasted more than 200 million videos viewed at the site. One year later, Hulu's metrics looked impressive, and enthusiastic fans believed Hulu had a viable business model [source: Perez]. Critics have been skeptical, though, claiming that the numbers may not reflect the financial reality behind Hulu's business [source: Blodget].

In this article, we'll take a look at the viewing and social networking features at Hulu.com. We'll also examine the computing power behind Hulu's service, as well as the site's business structure and societal impact.