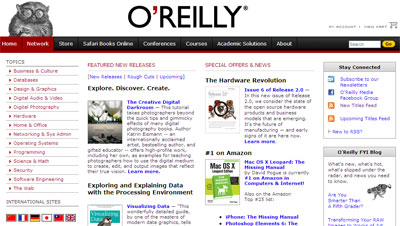 The O'Reilly Media Web site is a prime example of Web 2.0 at work.
Screenshot by HowStuffWorks 2007

Ask a dozen Internet experts what the term Web 2.0 means, and you'll get a dozen different answers. Some say that Web 2.0 is a set of philosophies and practices that provide Web users with a deep and rich experience. Others say it's a new collection of applications and technologies that make it easier for people to find information and connect with one another online. A few journalists maintain that the term doesn't mean anything at all -- it's just a marketing ploy used to hype social networking sites.

Before we get into the debate about what Web 2.0 actually means, let's look at where the phrase originated. In 2004, publishing firm O'Reilly Media and tradeshow production company MediaLive International had a brainstorming session. The two companies planned a conference that addressed the state of the Web, its future and the emerging techniques that would help ensure its success on the Internet. Tim O'Reilly, founder and CEO of O'Reilly Media, wanted to make the point that despite the dot-com crash of 2000, the Web was sure to become an enormous revenue generator.

During this brainstorming session, O'Reilly Media publisher Dale Dougherty coined the phrase Web 2.0 to describe the new Web environment that emerged after the crash. While dozens of Internet companies had declared bankruptcy, a few hardy sites managed to survive. New Web sites were appearing every day, and many of them used drastically different business models than the commercial sites that existed before the crash.

Still, no one had a clear definition of what Web 2.0 actually meant. If there really was a Web 2.0, did that mean there was also a Web 1.0? The use of "2.0" implied an improvement, or a new generation of Web sites, but there was no consensus on what made Web 2.0 different from Web 1.0.

In September 2005, Tim O'Reilly posted a blog entry that defined Web 2.0. The explanation spanned five pages of text and graphics illustrating O'Reilly's take on what the term meant.

In this article, we'll explore each of these points. We'll also look at the debate about whether or not Web 2.0 actually has a practical meaning.

In the next section, we'll look at what it means to use the Web as a platform.