Browse the article What are the pros and cons of social networking sites?

Are you an online network socialite? Do you Twitter about your Facebook status while listening to music on Last.fm? Have your friends noticed that you'll only talk to them 140 characters at a time? Then you've got your finger on the pulse of online social networking -- a big part of Web 2.0.

Just a few years ago, the idea of an online social network was revolutionary. While the Web has always provided a way for people to make connections with one another, social networking sites made it easier than ever to find old friends and make new ones. Today, it's rare to find someone who hasn't at least heard of Facebook, MySpace, Twitter or one of a hundred other social networks.

For novices in the world of social networking, the vast online landscape can be a little intimidating. There are so many options available and each one has its own terms of service or end user license agreement (EULA). Even Web veterans may find some of these agreements difficult to understand. There are times when it can feel like you're signing your life away just to get a profile on a Web site. You may not even know why you would want to use such a site in the first place, apart from the fact that everyone else seems to be on it.

We've taken on the task to break down the positive and negative aspects of online social networking sites. Before we go much farther, understand that there are a lot of things you should take into consideration before signing up. You should also know that the good tends to outweigh the bad, particularly if you're careful about the way you use these sites. So, let's start off with the pros of social networking sites.

The Pros of Social Networking

You can also use these sites to network professionally. Even if you're happy where you are in your career, you might be able to help someone else out. For instance, one friend might mention on his profile that he needs a carpenter to come to his house. You might know someone who's perfect for the job. All you have to do is send a couple of messages and you've helped two friends out at the same time!

Are you an actor, musician or writer? If so, you can use social networking sites to promote your work. Many sites allow users to create special pages for bands or theater companies. You can keep fans informed about everything from your latest single to the next time you'll perform. And social networking sites gives people the opportunity to interact with the artists they admire.

Several social networking sites also act as application platforms. You can find dozens of applications ranging from quizzes to games to restaurant review programs. On a site like Facebook or MySpace, you can challenge your friend to a game of trivia -- even if she's on the other side of the world!

Social networking may even get you out of jail! American graduate student James Karl Buck was in Egypt covering an anti-government protest rally when Egyptian police detained him. Buck sent out a single word over his Twitter feed: Arrested. People following him on Twitter knew that he was in trouble and began to contact U.S. authorities. Before long, Egyptian officials had released Buck [source: Simon].

But it's not all sunshine and roses. There are some drawbacks to social networking too. 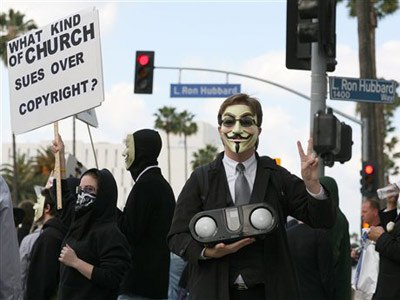 Groups like Anonymous use social networking sites to organize real world protests like this one against the Church of Scientology.
AP Photo/Chriss Weeks

Perhaps the biggest online social networking drawback is that it makes identity theft easier. In order to create a profile on a social networking site, you have to share some information about yourself. Many sites allow you to decide how much information to share. Some give you options to hide information like your e-mail address or birthday -- information that could give unscrupulous people the chance to send you spam or steal your identity.

The problem is that if you don't share any information, none of your friends will be able to find you on the site. That defeats the purpose of a social networking site in the first place. On the other hand, if you share too much you may discover that someone else is masquerading under your identity. They might even be destroying your credit rating or attempting to access your e-mail or financial information.

Another danger is that scammers use social networking sites to trick people into downloading malicious software (malware). A common tactic is to use social engineering. Social engineering plays on human nature to get results. For example, you might receive a link from a friend claiming that it leads you to a funny video that you appear in. Following the link brings up a message saying you need to install a video player before you can view the clip. But the video player is actually a virus or Trojan horse program that can harm your computer. Once your computer is infected, the scammer will use your friends list to try and spread the malware even further.

Social networking can be both overwhelming and addictive at the same time. If you join every social network and add hundreds of people as friends, you'll receive updates constantly. It'll become difficult to see any one individual's updates. You'll have a lot of noise to filter out if you want to find something specific. And you may find yourself checking for updates several times throughout the day when you really should be doing something else.

The good news is that the pros for social networking outweigh the cons. And with a few healthy habits, you can avoid or minimize the drawbacks. Just remember to be careful and responsible before you sign up!

Learn more about social networking through the links on the next page.