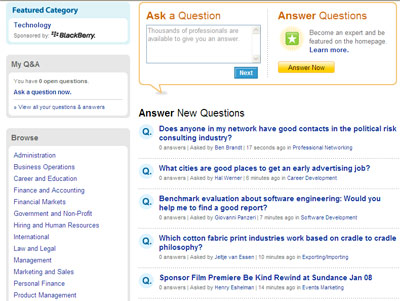 Whether LinkedIn works or not depends on what you're using it for. It's most useful when you have a specific task that you're trying to complete, like looking for a job or looking for advice from people in your field [source: B. Mann Consulting]. It's less useful if you're just a passive member who's collected some connections but isn't really in the market for a new job, or in a field that requires much professional networking.

On the most basic level, LinkedIn works really well for reconnecting with past colleagues and classmates. Because LinkedIn has reached a critical mass of 15 million members (and is expected to reach 18 million by the end of 2007), there's a good chance that many of the people you've worked with or went to school with have already signed up.

Beyond the satisfying voyeurism of seeing what old friends (or enemies) are up to, LinkedIn offers its users a way to put this previously invisible network of connections into action. Of course it's fun to get back in touch with old friends, but that's something you can do on a lot of other social networking sites. LinkedIn wants to inspire its users to go beyond fun and get down to business. Whether or not users respond to that challenge will dictate how useful the site becomes for them.

What's clear is that LinkedIn definitely works for recruiters. One recruiting firm we read about spends a little more than $7,000 a year on LinkedIn Corporate Services, but pulls in more than $100,000 in commissions from employees found through the service [source: Work Force]. One recruiter who uses the InMail service to contact prospects directly says he receives a response 90 percent of the time [source: Work Force].

Human nature is such that it's always easier to get a job from someone you know than from a complete stranger. A professional networking tool like LinkedIn has the potential to greatly expand the universe of who you know. A LinkedIn user with 41 connections can have more than 200,000 members in his or her network -- that is, people who are three degrees away or less. When it's time to look for a job, LinkedIn allows you to search for job openings within your network. Instead of cold-calling the office and asking for the hiring manager, you can get an introduction through a mutual friend.

LinkedIn also seems to work for sales leads, particularly if you have a large network of direct connections. We read about a CEO of an online advertising company who used an introduction from one of his direct connections to contact the COO of a potential client and invite him to lunch. The COO responded immediately. He said he didn't have time for lunch, but that he did need a new ad server. They signed a contract two weeks later [source: INC.com].

LinkedIn won't provide salesmen with thousands of leads like a purchased sales lead list, but the leads the site helps generate come with a distinct advantage: the possibility of an inside connection. As an article on Inc.com says, LinkedIn takes cold calls and "warms them up" through shared friends and colleagues [source: Inc.com].

As for entrepreneurs and small business owners, LinkedIn Answers can be an effective resource for specific business advice and potential partners. Browsing the lists of questions and answers in the "Startups and Small Businesses" sections, we found thoughtful, lengthy answers on subjects as varied as health insurance for small businesses, how to gain customer trust, and how to assemble an IT infrastructure quickly and cheaply. As with any message board system, there will be a fair share of spam and self-promotion, but LinkedIn is adding a new flagging functionality to call attention quickly to such annoyances [source: LinkedIn Intelligence].

But like all social networking sites, LinkedIn has the potential to be nothing more than an amusing time-waster, a way to gather your same old online friends and connections on the latest Web 2.0 craze. LinkedIn, however, is positioning itself as the place where social networkers will go when they get serious about networking [source: USA Today]. The idea is that all those Facebook-crazed college kids will shift over to LinkedIn when real life comes knocking at the door.

To wrap things up, let's talk a little about privacy and hacking concerns regarding LinkedIn.