The Geography of Second Life 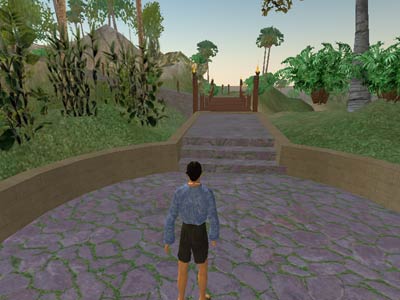 All new residents appear at Orientation Island when they first log into Second Life.
Second Life

When a new resident logs on to Second Life, his or her avatar appears at "Orientation Island." Here, the resident participates in a tutorial, learning how to navigate through Second Life, communicate with other residents and how to use menus and commands. The resident also learns about the places he or she may venture. All regions have a rating of either PG or mature. Regions with the PG rating should be free of objectionable material, including violent or sexually explicit content. In mature areas, rules are less strict -- avatars might wear revealing clothing or nothing at all, and residents have few behavioral restrictions.

Regions also have safe and unsafe ratings. A safe rating means you can wander around without fear of attack from other avatars or objects (unless you encounter griefers, residents who harass other users). An unsafe region allows residents to simulate combat, either with other users or with objects programmed to attack avatars. Unsafe regions let residents create their own version of an MMORPG, or simply satisfy the visceral thrill of getting into a fight.

Other geographic spaces in Second Life include the mainland, estates, islands and parcels. Linden Lab owns and oversees the mainland, a continent inside Second Life. An estate is a privately owned collection of regions with a unifying theme and code of conduct determined by the estate's owner -- there are estates in Second Life that simulate towns in the old West or medieval Europe. Islands are pretty much what they sound like: Small, independent land masses, usually under the control of a private owner or company. Parcels are very small units of land measuring 4 m2.

Premium membership residents can buy or rent land from Linden Lab or other residents. Land gives residents a place to build and store their virtual possessions, but it's not a necessity -- many residents wander through Second Life without ever owning land. If the resident buys land on the mainland, he or she answers directly to Linden Lab. If the resident rents land on another resident's estate, he or she will have to comply with that resident's rules and conditions. In turn, the estate owner has to pay Linden Lab for the land he or she owns.

Land owners can set their property as public access or private invitation only. They can also designate their land as a PG or mature area. If they own land on the mainland, they can create whatever decorations, landscaping or buildings they like. Because of this, neighborhoods on Second Life's mainland tend to be a hodgepodge of clashing styles. Estate owners can be more restrictive, requiring residents to comply with their aesthetics.

Now that we've learned about the geographical organization of Second Life, we'll examine what its avatars are like.

Linden Lab sets land fees according to how many basic objects, called primitives or prims, can fit within that space. Residents make complex items by joining prims together. The more objects in an area, the harder Second Life's servers must work to maintain that space. Second Life caps the number of prims areas can contain, currently set at 117 prims per 512 m2, or 15,000 prims per sim [source: Second Life Insider].