Walking and Talking in Second Life 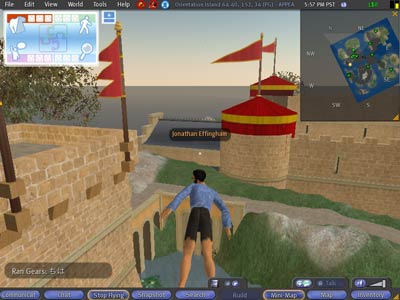 Flying in Second Life is as easy as clicking the "fly" button on your screen.
Second Life

Second Life's controls can be a little intimidating for new users. Its interface includes several menus, buttons and keyboard shortcuts. Many users find the learning curve too steep and quickly give up -- only about 10 percent of all users who make accounts ever bother to return after their first visit [source: New Scientist].

Avatars can get around Second Life by walking, flying or teleporting to their destination. Residents make their avatars walk around by using the arrow keys. Pushing the up arrow key makes the avatar walk forward, for example. Moving the mouse changes the position of the avatar's head, making it look around.

At the bottom of the resident's screen are several buttons, including the fly button. Clicking on this button will launch the resident's avatar into the air, allowing him or her to fly around like Superman. Flying lets avatars navigate over water or avoid other obstacles they might encounter on the ground.

Teleporting is the fastest method of travel in Second Life. Residents can teleport their avatars by opening up the map function. A window appears with the Map of Second Life, and the resident simply double-clicks on a destination to teleport there. Some locations may have restrictions, such as an island reserved for private use by another resident. In these cases, the avatar teleports as close to the location as possible without violating access restrictions. Without permission, the avatar can't enter restricted areas -- the resident would have to ask the area's owner for an invitation.

Pie-shaped menus include options that allow residents to interact with other users or objects. Right clicking on objects pulls up the menu, displaying a list of things the resident can do. Another way you can interact is to use gestures. Gestures are animations that can convey a mood or simulate an action. Second Life includes a tool that lets you design your own gestures, or you can get them by buying them or trading with another resident.

In the next section, we'll learn about the engine running Second Life and what kind of computer equipment you'll need to explore the community.

Hurry Up and Wait

One reason some users give up on Second Life is lag. Lag is a delay between the time you give your avatar a command and the time it actually responds. Lag happens when servers are overworked or when the connection between your computer and the servers is weak. Longtime residents accept lag as part of the Second Life experience, but for many new visitors it is off-putting.