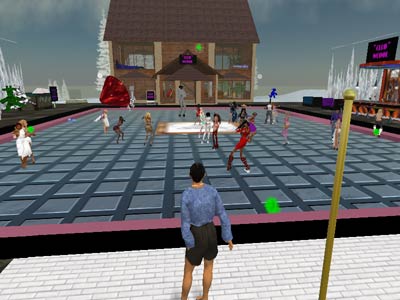 Linden Lab listed the population of Second Life at more than 10,500,000 residents as of October 2007. That figure sounds impressive, but it's important to keep a couple of mitigating factors in mind. First, Linden Lab allows users to create more than one account, so some of the 10,500,000 residents are duplicates. Second, the virtual world has a high churn rate, meaning most visitors only log on once and then abandon the program. Some observers mark the churn rate as high as 90 percent, meaning only 10 percent of all the people who visit Second Life will come back after the first visit [source: New Scientist].

Second Life publishes Economy stats, which include the number of residents who have logged in to the program over the past week, two weeks, month and two months. In October 2007, just fewer than 1,000,000 residents logged in.

According to Second Life's Web page, 60 percent of residents are men. User age ranges from 18 to 85. Residents who use Second Life come from all different backgrounds, from corporate executives to college students.

One unifying trait all residents share is that by creating an account in Second Life they agree to obey Linden Lab's terms of service (TOS). Linden Lab designed the TOS to help protect itself and honest residents from malicious users. Users should read the TOS carefully, particularly if they want to participate in Second Life's economy. The TOS makes it clear that Linden Lab has the right to wipe out a user's inventory, including any in-game currency he or she might have. The company also makes it clear that users can't hold Linden Lab responsible for incidents that delete user information.

Along with the Terms of Service, Linden Lab requires all users to follow the Community Standards. Community Standards lists six kinds of behavior, called the Big Six, which could result in a users' suspension or banishment from Second Life if he or she violates them. They are:

Linden Lab has employees in Second Life who can respond to situations, but the company mainly relies on users to report misbehaving residents. For most first offenders, Linden Lab will issue a warning. However, for repeat offenders, Linden Lab may suspend or revoke the user's membership. Offenders could lose all their items and money in the game, and as the Terms of Service make clear, Linden Lab would not have to refund their money.

In the next section, we'll look at some young Second Life users that populate the world of Teen Second Life.

Not for the Kids

Linden Lab designed Second Life to be an adults-only online community -- all residents must be 18 or older, though there is a separate virtual world called Teen Second Life for users between the ages of 13 and 17. Traditionally, residents could create accounts in Second Life without submitting to an age verification process. In May 2007, Linden Lab announced that SL would soon roll out an age verification system to ensure that all residents meet the minimum age requirement.