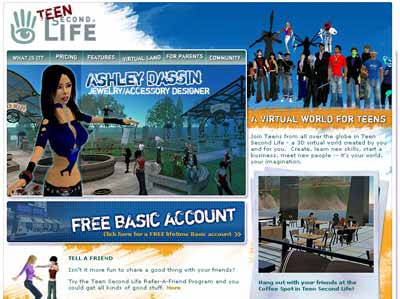 Teen Second Life's home page is where teenagers between the ages of 13 and 17 can create an account.
HowStuffWorks

Because Second Life places age restrictions on its residents, teenagers can't participate in the virtual world. It's not that Second Life is exclusive -- it's that Linden Lab wants to protect teens from the sometimes bawdy content that residents stumble across. But there's a separate virtual world altogether for users between the ages of 13 and 17: Teen Second Life.

Teen Second Life shares nearly all of the same features as regular Second Life. A basic account is free, but a premium account allows you to buy land. Teens can customize their avatars, build an endless variety of objects, and buy and sell in Linden dollars. They can also chat and send in-world instant messages, just like the older residents.

Safety is obviously a big priority whenever a teen community is concerned. Linden Lab staffs the teen world with liaisons who are there to help teens find their way around and to keep an eye out for potential problems. Here are some of Linden Lab's safety tips for Teen Second Life:

According to Second Life urban legend, some teens once successfully shot themselves into the main Second Life grid using a resident-made rocket ship. But we can't be sure that this tale is altogether accurate.