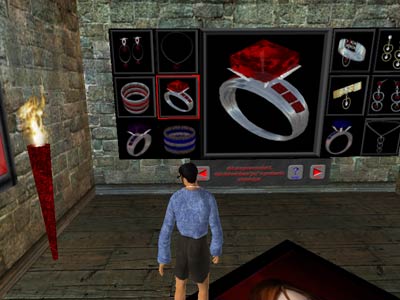 Second Life's economic model is one of the main reasons Second Life gets a lot of attention. Some people find it strange that someone would spend real money for a virtual house or shirt. It's even more difficult to believe that some people are making a living off of buying and selling items in Second Life. Some are concerned that the U.S. government will explore ways to tax in-game transactions.

Resident Ailin Graef not only makes a living off of Second Life but also became the first person to become a real millionaire through transactions in Second Life. Graef made her fortune by dealing in real estate, becoming what some residents call a land baron. She bought land in Second Life from Linden Lab, developed it using creative and stylish themes, then rented or sold the land back to other residents [source: Business Week].

Not all purchases use Linden Dollars -- land sales and auctions usually require real cash. If you want to buy your own island in Second Life, for example, you'll need to throw down $1,675. This will buy a 65,356 m2 island (an entire region). For this fee, you get to choose the island's terrain and location.

Own enough land and you'll have to pay Linden Lab a monthly fee to use it. Your land use fee pays for renting space on a server. The monthly premium membership fee entitles a resident to 512 m2 of land at no additional charge. As a user purchases more land, the land use fee increases.

As of October 2007, the land use fee ranged from $5 per month for ownership of up to 512 m2 of additional land to $195 per month for up to 65,356 m2 of land. Second Life calls residents who spend at least $125 per month on land use fees -- meaning they own at least 32,768 m2 -- concierge members. Linden Lab bases the land use fee off the maximum amount of land a resident owns during each 30-day billing cycle. Concierge members have access to a special team of Linden Lab customer relations employees who help resolve issues.

In the next section, we'll look at how organizations and events in the real world are crossing over into Second Life.

You've Got to Know When to Fold 'Em