How the MacBook Air Works

Browse the article How the MacBook Air Works 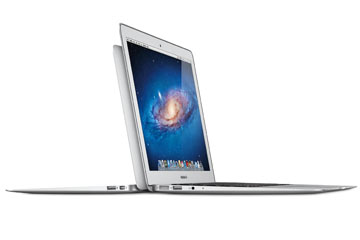 When Apple first introduced the MacBook Air to the world at the beginning of 2008, the company touted its new laptop as "the world's thinnest notebook."
Image courtesy of Apple

At first glance it might not even look like a computer -- at less than an inch thick it's certainly hard to image this aluminum, magazine-sized machine could contain all of the parts necessary for a computer to function. But the MacBook Air delivers in several areas, from its conversation-starting design and its surprising processing power to its user-friendly operating system. And when you flip open the lid and see the glowing Apple logo, you'll know there's more than three decades of Apple innovation inside.

When Apple first introduced the MacBook Air to the world at the beginning of 2008, the company touted its new laptop as "the world's thinnest notebook" [source: Apple]. The first ads showed the computer being removed from a yellow, office-style envelope -- highlighting the notebook's biggest selling point: its size.

And even though Apple had to make some compromises to fit a powerful computer in a wafer-thin shell, the MacBook Air still has many of the great features that make Macs so popular, including excellent software, functional accessories and a simple interface.

But the competition has recently started heating up for Apple. PC makers like Sony and Samsung have begun to enter the ultra-thin notebook arena, showing that the light, thin look is in for laptops these days. And even if the MacBook Air no longer holds the title as the thinnest notebook available, it's still one of the best-selling laptops on the market [sources: Fingas; Amazon].

So what's so great about the Air? Here we'll take a look at all aspects of this little machine to find out what makes it such a simple but powerful everyday computer.

What sets the MacBook Air apart from other clunky laptops on the market is its size -- it's less than an inch thick and weighs fewer than 3 pounds. That means you can toss it in a backpack, messenger bag or average-sized purse and barely know it's there. When it was first introduced in 2008, the thickness of the computer, when closed, varied between .76 inches at its thickest point and .16 inches at its thinnest [source: Apple]. But if you think that's small, consider the fact that over the years the computer has gotten even thinner: The 2011 models were between .68 and .11 inches thick [source: Apple].

At just under 3 pounds, the Air is Apple's lightest laptop yet -- a full 2 pounds lighter than its predecessor, the MacBook. It has an aluminum body, which gives it that sleek, industrial look. But the exterior design is also practical, because the aluminum shell is more durable and resistant to scratches than a plastic body. So even though it's thin and looks a little flimsy, the body is surprisingly strong [source: Snell].

In 2008 you could only buy your MacBook Air in one size: 13 inches. But in 2010 Apple introduced the slightly smaller 11-inch model. The 11-inch Air is the same thickness as the 13-inch model, but smaller in all other dimensions, and it weighs and costs less than the 13-inch model.

The MacBook Air still boasts a full-sized keyboard and screen, keeping it functional and practical for everyday use [source: Apple]. It features a 1280 x 800 resolution backlit LED screen, making everything -- from movies to games to Web sites -- appear sharp and bright [source: Cheng].

One feature that's both fun and practical is that the Air has an ambient light sensor to detect the brightness of the environment around you, then brightens or dims the screen and backlighting on the keyboard accordingly. So if you're computing in the dark, the screen will dim so the light isn't as harsh on your eyes, and if you're outside in the sun it will brighten to make everything on screen easier to see [source: Snell].

Other characteristic design features you'll find on the MacBook Air include a smooth and sensitive trackpad mouse, a built-in camera, a magnetic lid and an impressive seven hours of battery life.

When first introduced in early 2008, the MacBook Air came with an 80 GB hard disk drive (HDD). By late 2008, however, Apple offered two models: one with a 120 GB HDD or one with 128 GB solid state flash storage drive (SSD). This marked the first time Apple offered a notebook using SSD. By 2010, Apple had eliminated the hard disk drive entirely, offering only SSD storage on all its models [source: EveryMac]. Apple noted that the 2010 MacBook Air was "the first of a next generation of notebooks which will replace mechanical hard disks and optical drives with Internet services and solid state flash storage" [source: Apple]. By 2011, Apple was offering 256 GB SSD storage on its MacBook Air models.

So what's the advantage of SSD storage? For one, because SSD is 90 percent lighter than traditional HDD, it makes the computer itself lighter, which fits in with the slimmed-down image of the MacBook Air [source: Apple]. It also allows for faster reading and writing of data, quicker download speeds, a faster wakeup time and longer standby time than hard disk drives. Unlike the old hard drives with a spinning disk, SSD memory uses a static computer chip, meaning it makes less noise and is more resistant to shocks [source: Mearian].

And what about processing power? The first generation MacBook Air used a 1.6 GHz Intel Core 2 Duo Processor. By 2011 Apple switched to the new Intel Core i5 and Core i7 processors, which run faster, offer higher performance and produce better visuals than Intel's previous processors [source: Intel]. As for RAM, the early 2008 models featured only 2 GB, but by 2011 that had doubled to respectable 4 GB [source: EveryMac].

At first glance you might notice that the MacBook Air is a little light on ports -- the slots around the edges where you can plug things in. Most noticeably missing is the CD/DVD drive. But how much longer will those be needed? Most files today can be stored in the cloud or on USB drives or smart cards, and the MacBook Air has ports for those. The Air also features an audio port for plugging in headphones and speakers, a slot for the power cord and a Thunderbolt port, which is an in-out port for high-speed, high-resolution video, audio and data transfer [sources: Apple, Apple].

How much does it cost?

As far as Mac operating systems go, OS X Lion really changed the way Mac users interact with their computers. In many ways it moved toward the familiar functionality of touch screen devices, like the iPad and iPhone. For example, through a program called LaunchPad you can access and use apps, including ones you've already purchased for your iPad or iPhone through your iTunes account. What's more, OS X Lion allows you to use the laptop's trackpad to swipe and zoom, using hand motions similar to those on a touchscreen device [source: Apple].

In addition to Mac operating system, the MacBook Air comes equipped with iLife, which is a software package that includes iPhoto, iMovie and Garage Band [source: Apple]. And don't forget about all the additional software Apple offers that you can add. From iWork -- Apple's office software package with spreadsheet, word processing and presentation programs, to Final Cut Pro -- a dynamic, professional video editing software, Apple offers several tools to help you stay organized, have fun and get the job done.

Even though Apple's standard software is great, there are lots of options to upgrade. For instance, if you love iPhoto but want more professional photo editing tools and options, you can upgrade to Aperture to edit and organize all your photos. Plus, if you already have all your photos in iPhoto, you can easily transfer them to Aperture without hassle [source: Apple].

A popular software for musicians is Logic Studio, which makes it easy to create, mix, manage and perform your music using professional recording and editing tools. You can also transfer your music projects from Garage Band if you decide to upgrade to Logic Studio [source: Apple].

Want more? There are all kinds of software that's usable on Macs beyond just what Apple offers, including games, creative software and business tools.

In addition to software, Apple offers a bunch of fun and functional accessories you can purchase to ensure your MacBook Air suits all your needs. For instance, speakers will help you share your music with the world, while headphones will allow you to keep your tunes to yourself. If you want to make the most of Garage Band or Logic Studio software, you can get a music keyboard, DJ controller or guitar input for creating music of your own.

A popular add-on for Air owners is the MacBook Air SuperDrive, an external CD/DVD drive. It allows you to load software, listen to CDs, watch DVDs or burn to disks -- all things you'd be unable to do with the MacBook Air alone. The tiny SuperDrive connects via USB cable, and at around $80 it's a practical purchase if you find you ever need to use a CD or DVD [source: Apple].

If you spend a lot of time on your computer, you might want an external keyboard and mouse to ease the clicking and typing process. Apple also offers both as wireless so you don't have to fuss with a bunch of cords. Pair those with an additional big-screen monitor and you can browse the Web from 10 feet away.

If you're worried about data loss, Time Capsule is an external automatic computer backup device that will ensure you never lose any important files, even if you break or lose your computer. Available in 2 TB and 3 TB models, it would be difficult to run out of storage space. The best part is that Time Capsule is wireless, so you don't even have to hook up your computer to ensure your files are safe.

One of the great things about owning a laptop is its portability -- even if it's just carrying it from room to room in your home. The MacBook Air comes with built-in wireless capabilities, so it'll work with your home's wireless network. Not hooked up to wireless? Apple has that covered with the Airport Extreme Base Station, a device to send your Internet signal into the airwaves and make sure you're connected whether you're at your desk or lounging on the couch.

Want more info about Macs? Take a look at the links on the next page.

For whom is the MacBook Air best suited?

On many levels, the MacBook Air is a notebook for the average user. As Apple's least expensive and most basic laptop, it's a popular option for students, families and anyone using a computer on a daily basis. The easy-to-use operating system and the preinstalled software would be sufficient for most people's needs -- it's not loaded down with unnecessary extras. But at the same time its high-speed processor allows for gaming and its add-ons make it a viable option for those who want to use it for creative or business purposes. Plus, as an ultra-light laptop, it's portable and easy to own, so it's not surprising Apple has tagged it as the "ultimate everyday notebook" [source: Apple].