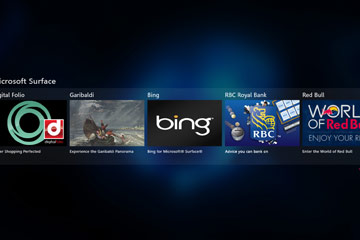 When you access a Surface device, you'll choose the application you want to use from its launcher.
Image courtesy of Microsoft

The Microsoft Surface platform relies on groundbreaking software to make all of its technologies work together seamlessly. We've already considered the system enhancements that interpret multiple touch points and other objects. Now, we'll zoom in to the graphical side of the NUI and look at its interactive software.

First, all the Surface software runs in what's called the Surface Shell. In operating systems, a shell is a process used to run and manage a group of related subprocesses. Likewise, the Surface Shell is the main process that can make use of the Surface hardware functions. The initial interaction most users have with the Microsoft Surface is with the Surface Shell running some application that entices you to touch the screen. The default application for this is a virtual pond of water that ripples when you touch it [source: Roodyn].

The launcher is a carousel of Surface applications that rotates similar to the Cover Flow viewing option in the Mac OS X Finder or in iTunes. You can spin the carousel by swiping your hand back and forth across the screen. When the application you want to use is centered on the carousel, you merely touch that app image to launch it. If you want to exit the launcher and return to the previous screen, you can touch one of the access points still waiting for you in the corners of the screen.

Microsoft includes a series of default Surface applications for playing music, drawing, photo organizing, map searching, shopping and banking. It even has a few games to choose from. Each of these applications recognizes and makes use of one or more of the following Surface hand motions [source: Microsoft]:

So far, this article has focused on the features of Surface and the technology behind it. Before we wrap up, though, let's glance at who's using Surface today and what challenges it might have from competition as time goes on. 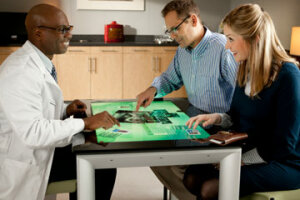 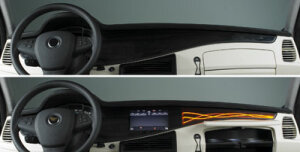