If you've ever taken a computer apart, you've seen the one piece of equipment that ties everything together — the motherboard. A motherboard is the central circuit board that has the components and connectors that allow all the parts of your computer to receive power and communicate with one another. It is sometimes referred to as the mainboard, main circuit board or base board. Motherboards typically boast a wide variety of built-in features, and they directly affect a computer's capabilities and potential for upgrades.

Motherboards are certainly not a new invention. They could be found in mainframe computers before the personal computer revolution. The first PC motherboards held very few actual components. The first IBM PC motherboard had only a processor and card slots. Users plugged components like floppy drive controllers and memory into the slots. Compaq was the first to use a motherboard not derived from an IBM design. This new design used a processor from Intel. Although some in the industry thought it was a gamble, when Compaq's sales took off, other companies followed suit.

In this article, we'll look at the general components of a motherboard. Then, we'll closely examine five points that dramatically affect what a computer can do.

The motherboard's main job is to hold the computer's microprocessor chip and enable other parts of the computer to connect to it. Everything that runs the computer or enhances its performance is either part of the motherboard or plugs into it via a slot or port.

The shape and layout of a motherboard is called its form factor. The form factor affects where individual components go and the shape of the computer's case. There are several specific form factors that most PC motherboards use so that they can all fit in standard cases.

The form factor is just one of the many standards that apply to motherboards. Here are some of the other standards:

The slots and ports found on motherboards include:

Many people think of the CPU as one of the most important parts of a computer. We'll look at how it affects the rest of the computer in the next section.

The CPU is the first thing that comes to mind when many people think about a computer's speed and performance. The faster the processor, the faster the computer can operate. Manufacturers use standard sets of pins to connect the CPU to the motherboard, called the Pin Grid Array (PGA). The different pin-and-socket layouts result from further research and development and are designed to make the most of the processor's capabilities.

CPU manufacturers have used a variety of PGAs. Motherboard socket arrangements are often named for the number of pins in the PGA. Architectures change quite often, but some examples include:

Newer Intel CPUs use an LGA, which stands for Land Grid Array. An LGA is different from a PGA in that the pins are part of the socket, not the CPU. LGAs also come in specific configurations, such as:

The CPU communicates with other elements of the motherboard through a chipset. We'll look at the chipset in more detail next.

Which Motherboard Do I Have?

The GMCH performs a similar role to the northbridge, working with memory and graphics. The ICH takes over the jobs of the southbridge.

Chipset selection and CPU selection go hand in hand because manufacturers optimize chipsets to work with specific CPUs. The chipset is an integrated part of the motherboard, so it cannot be removed or upgraded. This means that not only must the motherboard's socket fit the CPU, the motherboard's chipset must work optimally with the CPU.

Next, we'll look at buses, which, like the chipset, carry information from place to place.

A bus is a circuit that connects one part of the motherboard to another. The more data it can handle at one time, the faster it allows information to travel. The speed of the bus refers to how much data can move across the bus simultaneously.

In newer motherboards using PCIe, you might see bandwidth described in terms of numbers of lanes, which function like lanes on a street. Each lane has two pairs of wires, one for receiving information and the other to transmit. Unlike what you see on city streets however, the lanes are inside the bus. Each device needs enough lanes to manage the throughput it needs. If you're building a high-end gaming machine with a powerful graphics card, you'll want more lanes, but for a simple daily work computer you probably don't need as many.

Bus speed usually refers to the speed of the front side bus (FSB), which connects the CPU to the northbridge. FSB speeds can range from 66 MHz to over 800 MHz. Since the CPU reaches the memory controller though the northbridge, FSB speed can dramatically affect a computer's performance.

Here are some of the other busses found on a motherboard:

The faster a computer's bus speed, the faster it will operate — to a point. A fast bus speed cannot make up for a slow processor or chipset.

Now let's look at memory and how it affects the motherboard's speed.

Memory and Other Features

The amount of memory available also controls how much data the computer can have readily available. RAM makes up the bulk of a computer's memory. The general rule of thumb is the more RAM the computer has, the better.

Much of the memory available today is dual data rate (DDR) memory. This means that the memory can transmit data twice per cycle instead of once, which makes the memory faster. Also, most motherboards have space for multiple memory chips, and on newer motherboards, they often connect to the northbridge via a dual bus instead of a single bus. This further reduces the amount of time it takes for the processor to get information from the memory.

In the earliest days of motherboards, virtually everything other than the processor came on a card that plugged into the board. Now, motherboards feature a variety of onboard accessories such as LAN support, video, sound support and RAID controllers.

Motherboards with all the bells and whistles are convenient and simple to install. There are motherboards that have everything you need to create a complete computer — all you do is plug the motherboard in a case and add a hard disk and a power supply. You have a completely operational computer on a single board.

For many average users, these built-in features provide ample support for video and sound. For avid gamers and people who do high-intensity graphic or computer-aided design (CAD) work, however, separate video cards provide much better performance.

Up Next
What Is the Difference Between a Pentium and a Celeron Processor?
Explore More 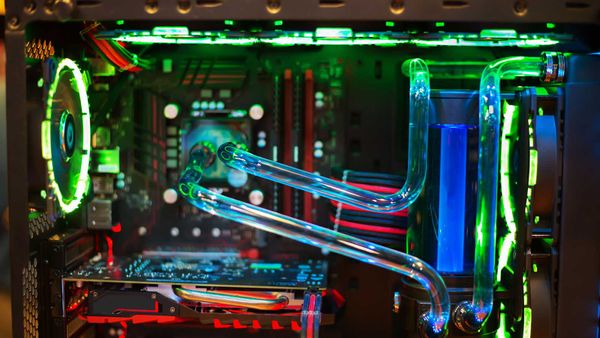 You May Like
How Liquid-cooled PCs Work
Explore More

Keep Reading
What Is the Difference Between Static RAM and Dynamic RAM?
Explore More