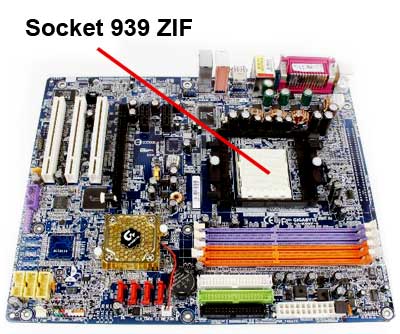 The CPU is the first thing that comes to mind when many people think about a computer's speed and performance. The faster the processor, the faster the computer can think. In the early days of PC computers, all processors had the same set of pins that would connect the CPU to the motherboard, called the Pin Grid Array (PGA). These pins fit into a socket layout called Socket 7. This meant that any processor would fit into any motherboard.

Today, however, CPU manufacturers Intel and AMD use a variety of PGAs, none of which fit into Socket 7. As microprocessors advance, they need more and more pins, both to handle new features and to provide more and more power to the chip.

Current socket arrangements are often named for the number of pins in the PGA. Commonly used sockets are:

The newest Intel CPU does not have a PGA. It has an LGA, also known as Socket T. LGA stands for Land Grid Array. An LGA is different from a PGA in that the pins are actually part of the socket, not the CPU.

Anyone who already has a specific CPU in mind should select a motherboard based on that CPU. For example, if you want to use one of the new multi-core chips made by Intel or AMD, you will need to select a motherboard with the correct socket for those chips. CPUs simply will not fit into sockets that don't match their PGA.

The CPU communicates with other elements of the motherboard through a chipset. We'll look at the chipset in more detail next.