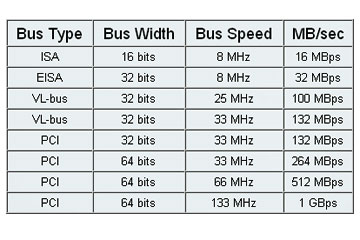 The frontside bus is a physical connection that actually connects the processor to most of the other components in the computer, including main memory (RAM), hard drives and the PCI slots. These days, the frontside bus usually operates at 400-MHz, with newer systems running at 800-MHz.

The backside bus is a separate connection between the processor and the Level 2 cache. This bus operates at a faster speed than the frontside bus, usually at the same speed as the processor, so all that caching works as efficiently as possible. Backside buses have evolved over the years. In the 1990s, the backside bus was a wire that connected the main processor to an off-chip cache. This cache was actually a separate chip that required expensive memory. Since then, the Level 2 cache has been integrated into the main processor, making processors smaller and cheaper. Since the cache is now on the processor itself, in some ways the backside bus isn't really a bus anymore.

PCI can connect more devices than VL-Bus, up to five external components. Each of the five connectors for an external component can be replaced with two fixed devices on the motherboard. Also, you can have more than one PCI bus on the same computer, although this is rarely done. The PCI bridge chip regulates the speed of the PCI bus independently of the CPU's speed. This provides a higher degree of reliability and ensures that PCI-hardware manufacturers know exactly what to design for.

PCI originally operated at 33 MHz using a 32-bit-wide path. Revisions to the standard include increasing the speed from 33 MHz to 66 MHz and doubling the bit count to 64. Currently, PCI-X provides for 64-bit transfers at a speed of 133 MHz for an amazing 1-GBps (gigabyte per second) transfer rate!

­ PCI cards use 47 pins to connect (49 pins for a mastering card, which can control the PCI bus without CPU intervention). The PCI bus is able to work with so few pins because of hardware multiplexing, which means that the device sends more than one signal over a single pin. Also, PCI supports devices that use either 5 volts or 3.3 volts.

Although Intel proposed the PCI standard in 1991, it did not achieve popularity until the arrival of Windows 95 (in 1995). This sudden interest in PCI was due to the fact that Windows 95 supported a feature called Plug and Play (PnP), which we'll talk about in the next section.