The Pirate Bay on Trial 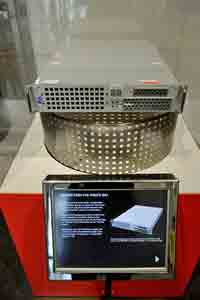 One of the Pirate Bay servers is on display at Sweden's National Museum of Science and Technology.
AP Photo/Scanpix Sweden/Fredrik Persson

Throughout its existence, the Pirate Bay has moved from one controversy to the next, each progressively more invasive to its operations. These conflicts are fueled by anti-piracy groups, especially the Motion Picture Association of America (MPAA) and its international arm, the MPA. The MPAA also funded Svenska Antipiratbyrån as a direct effort to capture information about file sharers and enforce copyright laws set forth by the European Union.

The first major action against the Pirate Bay came on May 31, 2006, when Swedish police raided its server room, carrying away enough computers to fill three rental trucks. The MPAA issued a press release proclaiming the event as a major victory in its fight against copyright violations. However, determined site operators quickly had the site up again, this time in the Netherlands, only three days later. Much to the disappointment of the MPAA, the buzz generated from this single event made the Pirate Bay even more popular. Eventually, operations were moved back to Sweden.

Both sides of the battle had issues in the months following the raid. The MPA was thought to have put political pressure on law enforcement to force the raid. Sweden's constitution specifically creates a barrier that should prevent such pressure. At the same time, a Swedish newspaper revealed information that implied the Pirate Bay operators were turning a profit on ad sales. This report created doubt that the site was living its own philosophy and claims toward a selfless ideal.

After 20 months of investigation following the 2006 raid, site operators Gottfrid Svartholm, Peter Sunde, and Fredrik Neij were charged with aiding copyright violators, and of working with Carl Lundström to turn the Pirate Bay into a commercial site. The trial was held in February and March of 2009, with plantiffs including Warner Brothers, MGM, EMI, Colombia Pictures, Twentieth Century Fox, Sony BMG and Universal.

During the trial, prosecutors carefully shaped their case to get a conviction and hundreds of supporters for the defendants raised their colors outside the Swedish court during the trial. The Pirate Bay and Piratbyrån not only offered bold testimonials, but also blogged about the trial at Spectrial, hosted at trial.thepiratebay.org. On April 17, 2009, the court announced a guilty verdict, with sentences including a year of jail time for each for the four charged, plus a fine of $3.6 million. News continues to unfold about how the four men will complete their sentences, and how that will impact the Pirate Bay.

As of this writing, the trial and its outcome has not run the Pirate Bay aground. The site still boasts 3.8 million registered users, 1.7 million torrents and almost 13 million peers. The fame of the trial prompted Sweden's National Museum of Science and Technology to spend 2,000 Swedish kronor (about $286) to get one of the servers confiscated in the 2006 raid. The museum announced it would add the server to a special display featuring illegal downloading.

Also, the Pirate Bay had agreed to be acquired by Global Gaming Factory for about $8.5 million. Though the prospective owners described intentions to turn the site into a legal paid services site, the Swedish stock exchange de-listed the company on allegations that it was not being truthful with its investors. Global Gaming Factory CEO Hans Pandeya released his own manifesto, of sorts, called "Thoughts About the Pirate Bay," and tech site reporters are still closely following the story.

For more information on file sharing and related topics, sail over to the next page.