Pros and Cons of Power-line Networking 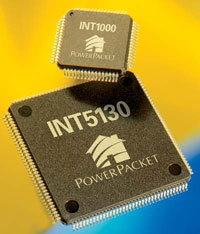 There are two competing power-line technologies. The original technology is called Passport, by a company named Intelogis. A new technology called PowerPacket, developed by Intellon, has been chosen by the HomePlug Alliance as the standard for power-line networking.

Here are the advantages of a power-line network:

The new PowerPacket technology provides a couple of other advantages as well. It is fast, rated at 14 megabits per second (Mbps). This speed allows for new applications, such as audio and video streaming, to be available throughout the house.

There are some disadvantages to connecting through power-lines when using the older Intelogis technology:

According to Intellon, PowerPacket technology eliminates many of these concerns, citing the following advantages:

Now let's find out how each of these technologies works.

Special thanks to Intellon for their assistance with this article.