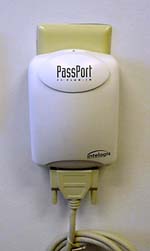 To install an Intelogis PassPort power-line network, you plug a wall device like this into an outlet.

Intelogis provides a kit that connects two computers and one printer for $59. Additional adapters cost about $40. There are specific versions for computers or printers, so make sure you get the correct one. Since the network does not affect power usage or consumption, no additional monthly costs are incurred.

The cost of PowerPacket technology is expected to be comparable to HomePNA solutions and significantly less than 802.11 wireless solutions.

The physical connection between each computer and the Intelogis power-line network uses the computer's parallel port. A wall device is plugged directly into the electrical outlet (it will not operate properly if plugged into a surge protector).

Initial PowerPacket devices connect via a USB or Ethernet cord from the computer to a small wall adapter. Subsequent devices will have the circuitry built in, meaning the only connection needed would be the power cord.

Once the physical connections are made, installation of the software is a snap. The software automatically detects all nodes (computers and printers) on the network. Whether your Internet connection is by cable modem, DSL or normal modem, the included proxy server software allows you to share the Internet with your other computers. You can easily add computers by simply plugging a new adapter in and installing the software. Additional printers can be added using the printer plug-in adapter. File and printer sharing is done through Windows.

There are two common types of home networks: peer-to-peer and client/server. Client/server networks have a centralized administrative system that provides information to all of the other devices. Peer-to-peer means that each device can talk directly to each other device on the network without consulting a central system first. Intelogis Passport technology uses a client/server network. The first computer that you install the software on becomes the Application Server. In essence, it is the director of the network, controlling the flow of data and telling each device on the network where to find the other devices. Intellon's PowerPacket technology uses a peer-to-peer network.