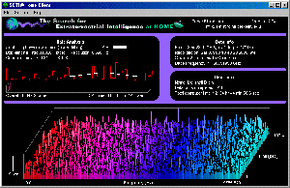 For most people, a screensaver pops up whenever you leave your computer unattended for more than a couple of minutes. It may simply be a blank screen, a specialized program such as SETI@Home, or it could be something as outrageous as dancing macaroni.

But what is a screensaver exactly? What purpose does it serve? How does it know when to start? In this article, we will look behind the screen and check out just what's going on.

What is a Screensaver? 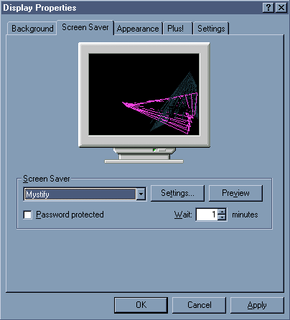 A screensaver is really just an executable file, with the extension changed from .exe to .scr. File extensions tell the computer what kind of file it is dealing with. For example, winword.exe is a word-processing application that can be loaded by the computer, while article.doc is a text file that can be loaded into the Microsoft Word word-processing application.

So we know that, in essence, a screensaver is a program. By putting a screensaver file into the Windows or System directory and giving it a .scr extension, Windows knows that it should treat this file as a screensaver and makes it available as an option in the Display properties window. The screensaver file can be programmed in several different ways. It can:

Most screensavers offer some combination of these features. Except for the slide-show screensavers that display a sequence of images, screensavers generally move an image, piece of text or animation around the screen. The screensavers that have a custom interface, and do not use the Display properties window at all, are less common. Usually, these screensavers do not have the .scr extension. They require that you install them using a setup program in order to configure them properly.

What Are Screensavers For?

Screensavers were originally designed to protect computer monitors from phosphor burn-in. Early CRT monitors, particularly monochrome ones, had problems with the same image being displayed for a long time. The phosphors, used to make the pixels in the display, would glow at a constant rate for such a long period of time that they would actually discolor the glass surface of the CRT. This discoloration would then be visible as a faint image overlaying whatever else was displayed on the monitor. Advances in display technology and the advent of energy-saver monitors have virtually eliminated the need for screensavers. But we still use them.

Here are the main reasons why:

We will go through the process of how a screensaver works based on a Windows 95/98 computer. Although the system commands and exact details may differ, the process is essentially the same for other computers as well.

Your computer constantly monitors the activity going on between the various components of the system. When it notes that the keyboard and mouse have been idle for the amount of time indicated in the screensaver settings of the Display properties window, the system sends a special command to the foreground (current) application to see if it can launch the screensaver. If an application is running that has a Computer Based Training (CBT) window open, or has a non-Windows program, such as one run from the MS-DOS prompt, as the foreground application, Windows will not start the screensaver.

Here's exactly what it does:

In the next section, you'll find out how to set up your own screensaver.

In Windows 95/98, you can configure a screensaver easily:

There are several ways to get a screensaver:

Commercial screensaver collections were very popular several years ago, but the growth of the Internet has resulted in the availability of such a variety of free screensavers that few people are willing to pay for them anymore. Programs like Screen Saver Builder allow you to combine images, animations and sounds to create your own custom screensavers. If you are a programmer, there are numerous online resources that supply you with technical information, and even source code, so that you can write your own screensavers. And when you have created that incredible new screensaver that everyone is going to want, there are several sites that you can upload it to in order to share it with the world!

For more information on screensavers, including screensaver download sites, check out the links on the next page.