Marking Up: XML and RDF 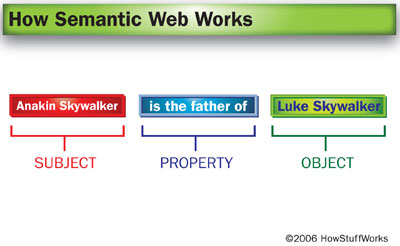 An RDF triple has a subject (Anakin Skywalker), an object (Luke Skywalker) and a property that unites the two.

Let's say you want to make this sentence readable to a computer:

It's easy for you to figure out what this sentence means -- Anakin and Luke Skywalker are both people, and there is a relationship between them. You know that a father is a type of parent, and that the sentence also means that Luke is Anakin's son. But a computer can't figure any of that out without help. To allow a computer to understand what this sentence means, you'd need to add machine-readable information that describes who Anakin and Luke are and what their relationship is. This starts with two tools -- eXtensible Markup Language (XML) and Resource Description Framework (RDF).

XML is a markup language like hypertext markup language (HTML), which you're probably somewhat familiar with from surfing the Web. HTML governs the appearance of the information you look at on the Web. XML complements (but does not replace) HTML by adding tags that describe data. These tags are invisible to the people who read the document but visible to computers. Tags are already in use on the Web, and existing bots, like the bots that collect data for search engines, can read them.

RDF does exactly what its name indicates -- using XML tags, it provides a framework to describe resources. In RDF terms, pretty much everything in the world is a resource. This framework pairs the resource (any noun, like Anakin Skywalker or the "Star Wars" trilogy) with a specific item or location on the Web so the computer knows exactly what the resource is. Clearly identifying resources keeps the computer from doing things like confusing Anakin Skywalker with Sebastian Shaw or Hayden Christiansen, or the original trilogy with the One-Man "Star Wars" Trilogy.

To do this, RDF uses triples written as XML tags to express this information as a graph. These triples consist of a subject, property and object, which are like the subject, verb and direct object of a sentence. (Some sources call these the subject, predicate and object.) RDF already exists on the Web -- for example, it's part of RSS feed creation.

So far in this example, the computer knows that there are two objects in this sentence and that there is a relationship between them. But it doesn't know what the objects are or how they relate to one another. We'll look at the tool for adding this layer of meaning next.