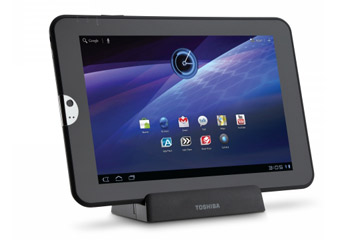 Thrive tablet debuted in July 2011 with features like an HDMI port and a removable battery.
Photo Courtesy Toshiba

The variety of Android tablets on the market make it difficult to sum up specifications. Android tablets are really just specialized computers. In general, most tablets contain the following hardware components:

Specific Android tablets may have other components or may lack some of the ones on this list.

Android's software stack begins with the hardware at the bottom. These are the physical components that make up the Android tablet device -- processors, sensors, wires and circuit boards. On top of this layer rests the kernel. An operating system kernel is sometimes called firmware -- software that controls, manages and allocates hardware resources so that the device does what you tell it to do. Google modeled Android's kernel after Linux 2.6, an open-source operating system.

On top of the kernel are Android's libraries. The libraries in Android are collections of instructions the device follows when processing different types of data. An example is the three-dimensional acceleration library, which contains all the instructions the Android device needs to interpret and respond to changes in the device's orientation and acceleration. Next to the Android libraries -- on the same level in the software stack -- you'll find the core libraries necessary to support applications written in Java. Java is a programming language from Sun Microsystems.

On the same layer as the libraries you'll find the Android virtual machine. This is a piece of software that creates a virtual operating environment. It acts just as if it were a physical device with its own operating system. Google designed this layer so that each application on Android runs as a single process. That way, should a process crash on you while you're in the middle of it, everything else remains unaffected. The virtual machine also acts as a memory manager.

The next layer up is the application framework. This is the foundation for all the apps on your Android device. The application framework acts as a liaison between Android apps and the rest of the operating system. Google outlines the guidelines to build apps that interact with this layer in the Android application programming interface (API). Developers only have to learn the rules set down by the API -- they don't need to worry about the hardware specifications of each Android tablet.

Finally, the top layer includes the user interface and all the apps on the Android tablet. This is the part of the operating system the average user sees. But underneath that flashy layer of animation and interaction is a lot of code!

Next, we'll look at what you should consider when buying an Android tablet.