Browse the article How the FileMate Identity Tablet Works 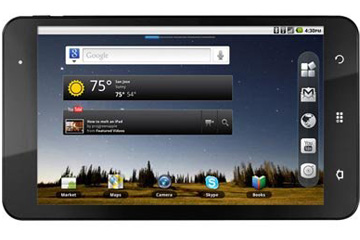 The perennial quest for the all-in-one computing device turns up another tablet, but this time it's affordable. The FileMate Identity, a 7-inch (nearly 18-centimeter) tablet running Android OS 2.2 (aka the Froyo operating system) sells -- if you can find one -- for around $110, well down from its April 2011 introductory price of $299-plus.

Depending on your point of view, a tablet is either an outsized smartphone or a smooshed PC packing a smaller, underclocked microprocessor, a rechargeable battery and no fan. Tablets don't handle big programs; rather, their operating systems run tricked-out versions of more bite-sized smartphone apps. A growing demand for media-focused devices has, however, kicked off an arms race for faster, beefier portables, and the Identity keeps pace ... with tablets from early 2011.

Even by that standard, Identity's 800 x 480 resolution, while bright and adequate for most Internet video, pales beside similar tablets launched around the same time [sources: Samsung; Sung]. The Samsung Galaxy, for example, featured 1024 x 600. You probably won't notice the difference much except while browsing.

The larger problem with Identity lies in its outdated and tablet-unfriendly Froyo OS. As of July 2012, tablets running Android version 4.1 (aka Jelly Bean) had already hit stores; in fact, devices running 2.3 (Gingerbread) and 3.0 (Honeycomb) were available when Identity launched. Unless you demand bleeding-edge tech, you probably won't miss the difference, but you might miss any fresh apps that won't run on the stale OS [sources: Google; Kendrick]. If you do, you could hold out for the E301, a Gingerbread version teased at the 2011 Consumer Electronics Show (CES) by Korean company and Wintec partner Enspert -- assuming it ever comes out [source: Cartwright].

Bear in mind, too, that Froyo wasn't designed to support tablets. Many early tabs shoehorned the OS in by building, essentially, big-screened smartphones. Even so, many Froyo tablets get a bit glitchy around apps designed for phones and tend to not play well with Android Market, Google's official app store [source: Carmody]. For what it's worth, Wintec claims that the Identity is "officially registered with Google" [sources: Carmody; Kendrick; Wintec].

Here, as elsewhere, "let the buyer beware" remains good advice. Wintec's Identity support pages acknowledge issues with freezing, but provide a firmware update to address the issue. The company also offers advice for remedying network connection problems, so its connectivity software likely isn't all it's cracked up to be. One last warning: Write down your password. If you forget it, the device will permanently lock you out, and you will void your warranty to boot [source: Wintec].

All of that might sound pretty bad, but some buyers are willing to tolerate a few niggles if the price is right. Still, it's not a bargain unless the bang-for-your-buck offsets the risks and petty frustrations.

Cracking the case and peeking under the hood, we can see that the FileMate Identity Tablet packs a 1-gigahertz processor from industry giant ARM, along with 512 megabytes (MB) of RAM and an 8-gigabyte (GB) flash memory, which you can boost to 32 GB by popping a memory card into the Secure Digital (SD) slot. Flash memory -- a favorite storage medium for digital camera cards, memory sticks and thumb drives -- has no moving parts, making it ideal for miniaturization.

Identity's power train stacks up a bit light compared to other, mid-2012, 7-inch (18-centimeter) tablets, such as the Nexus 7, which packs a more efficient quad-core processor, 1 GB of RAM and 8-16 GB of storage, or the Samsung Galaxy Tab 2 7.0, which sports a dual-core chipset.

The device uses a capacitive touch screen, which means that you must use your finger (or a South Korean sausage) to interact with it. Unlike resistive systems, which detect touch through pressure, capacitive screens sense interruptions in an electric field and therefore require something conductive to touch them. Identity's multitouch screen means you can pinch and zoom to your heart's content.

Connecting wirelessly should pose little problem. The Identity supports WiFi IEEE 8.2.11 in b, g and n flavors, and Bluetooth 2.1 with EDR (Enhanced Data Rate) for faster data transfer between devices. One reviewer reported a steady connection with very good range [source: McAffee]. The tablet does not support 3G or 4G, though, which could leave you feeling stranded in the slow lane.

The engine is important, but it means little without good fit, finish and form factor -- to say nothing of those all-important ports.

"But what about my files?" I hear you saying. Here, too, the FileMate Identity has you covered -- mostly. The tablet supports Microsoft Office file types (DOC, PPT and XLS) as well as ePub and, for the South Koreans in the house, HWP. Supported image formats, though limited, more or less cover the waterfront with JPG, BMP and GIF. Video formats include the usual alphabet soup of DivX 4/5, H.263 and H.264/MPEG-4 AVC, XviD, MPEG, AVI, ASF and 3GP9. Identify handles audio formats OGG, WMA, 3GP and MPE.

In keeping with smartphone-style Android interfaces, Identity is laid out with physical home, menu and back buttons set flush along the bottom bezel. Unfortunately, the buttons aren't backlit. A USB-mini B-type port means that your micro-USB charger kit will not go to waste. Unlike some competitor tablets on the market, Wintec hasn't inflicted another proprietary port on you.

Flanking the USB port on one short side are two internal stereo speakers. The remaining slots lie along the opposite edge behind a sleek access panel. They include a full-sized SD slot, which should be a pleasant surprise for anyone who needs to quickly view or edit photos (it's also a clever move for a company that makes memory cards). Of course, you can also use the 3-megapixel camera (with zoom) to satisfy your photographic and video needs, although it lacks an onboard flash, and the back-facing camera might interfere with your Skype sessions or Google+ hangouts.

A mini HDMI port for streaming video to your television further underscores this tablet's audiovisual emphasis, as does its Convergence One app, which enables the device to connect wirelessly to any DNLA-enabled electronics [source: Kendrick]. DLNA, or Digital Living Network Alliance, is a network communication standard that enables compliant devices -- such as home networks and entertainments systems, including Apple AirPlay and Samsung AllShare Play -- to talk to one another.

The tablet comes standard with the usual lineup of internal compass and three-axis accelerometer as well as a WiFi and Bluetooth module.

Don't expect too much in the way of onboard software. Of course, some people just prefer stock computers; it's one way to avoid "bloatware" -- the useless applications that come preloaded on devices and waste space and memory. Then again, unlike many tablets, Identity comes fully registered with Google, so accessing Android Market and Google apps should be a snap. The tablet also comes preloaded with Google Search, Google Map, G-mail, Google Calendar, Google Talk, Android Market and YouTube.

The nonremovable lithium ion battery should provide reasonable battery life. Wintec advertises four hours of battery life on video playback and, depending on which page of the product Web site you check, either 120 or 500 hours on standby. One reviewer's testing found that Identity exceeded the former estimate by an hour and approached 121 hours on standby [source: McAffee].

The Identity tablet ships with a miniUSB to USB cable, power supply and cord, storage pouch, cleaning cloth, earphones, quick start guide and a CD-ROM with user manual and installation instructions. Despite several retailers listed on the company Web site, as of July 2012, we could only find a few Identity tablets for sale on Amazon and eBay.

While reading this article, you might have noticed my repetitive use of the S-word. I mean, of course, the word "should." Although not a swear word in the traditional sense, it is tantamount to one for a professional writer, who really "should" know his subject well enough not to resort to such caginess.

Here's the problem: Very little information exists concerningthe FileMate Identity Tablet. Worse, the available data -- even on the company Web site -- conflicts. With no response from Wintec to my queries, I could only report the limited confirmable facts with as much accuracy and context as possible. I hope you find it at least marginally helpful.