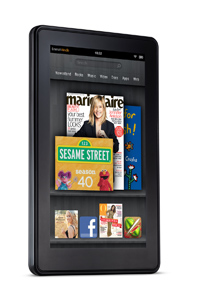 Amazon is a company with a history of taking on challenges and coming out on top. It first launched in 1995, when business on the Web was still in its infancy. It weathered the storms of the bursting dot-com bubble and stayed afloat. What began as a company that sold books is now a massive corporation offering everything from computer hardware to socks. But even as the company evolves, it celebrates its literary roots.

In 2007, Amazon introduced the Kindle e-reader. Like other e-readers on the market, the Kindle used electronic ink from a company named eInk to display text and images. Because the device only consumed power when connected to a network or when it had to display a change in pages, its battery could last for more than a week without needing a recharge. Storage space on the device was ample enough to let a user carry thousands of books around. And Amazon's digital book library included an impressive number of titles.

Not content to rest on the success of the Kindle, Amazon introduced a new device in September 2011 called the Kindle Fire. Unlike the original Kindle line of products, the Fire doesn't use eInk. It's a tablet device with an LCD display and the ability to run apps, browse the Web and play video and music. Oh, and you can still use it to read electronic books too.

Amazon Kindle Fire Inside and Out

The Kindle Fire is a 7-inch (17.8-centimeter) tablet, making it smaller than Apple's iPad, the most popular tablet on the market according to surveys [source: Netburn]. It's comparable in size to the standard Amazon Kindle e-reader. Its design is simple -- on the bottom edge of the device there are two ports and one button. The ports include a micro-USB port for charging and transmitting data over a USB cable and a 3.5-millimeter (0.14-inch) headphone jack. The power button is the only physical button on the Kindle Fire. All other controls for the Kindle Fire are virtual -- you activate them through the capacitive touch-screen interface.

Checking under the hood, the Amazon Kindle Fire packs a lot of punch in a small space. A lithium-ion battery provides power. It's a rechargeable battery and one you can't easily replace if it fails. To get to the battery, you'd have to pry apart the front and back halves of the Kindle Fire's case -- a sure way to void your warranty.

These components give the Kindle Fire the ability to access media, process data and accept commands. The processor is like the brain -- it crunches numbers and gets results. The memory stores your media and data needed for apps. The RAM acts as a cache, holding important data so the processor can get to it quickly. The bus is like the nervous system -- it routes data to the appropriate destinations. The transmitter sends data to the Kindle Fire's display and the transceiver allows the device to communicate with a network. The touch-screen controller monitors the Kindle Fire's capacitance screen.

In July 2012, rumors surfaced that Amazon would introduce a new line of Kindle devices in various sizes with as many as five or six new models [source: Blanco].

Capacitance touch-screen interfaces have been around for a while. They rely on a weak electrical field to register a touch. Here's how they generally work:

Between the glass surface of the Amazon Kindle Fire and the background of the screen is a sandwich of different layers. The base of this sandwich is the LCD display. The layers closest to the screen are conductive layers of transparent material such as indium tin oxide (ITO). These layers create a capacitance grid. The Kindle Fire generates a weak electric field across this capacitance grid.

When your finger -- or any material capable of altering the electric field -- comes into contact with the screen, the field changes. Your finger actually draws current from the field. It's such a weak electric field that you don't sense it yourself. But the Kindle Fire can sense the changes in the field and map them to a specific spot that corresponds to the display screen. The Kindle Fire's software maps the touch to whatever command you were executing.

It's easy to understand with an example. Let's say you want to read your copy of "Fahrenheit 451" by the late Ray Bradbury. You recently purchased the book and so it appears on your home screen. You touch the picture of the book's cover. At that point, the Kindle Fire detects where your finger contacts the screen as the electric field generated across the screen changes. Mapping the location of your touch to the data represented in the icon, the Kindle Fire knows to retrieve and open the copy of the book you've requested.

The grid-like structure of the capacitive screen allows the Kindle Fire to detect multiple touches. The grid creates a series of x and y axes that the Kindle Fire relies upon to determine where you're touching and how many fingers you're using. Earlier capacitive screens in electronics relied on capacitors located at the four corners of a screen, which meant the screen could only deal with a single point of contact. 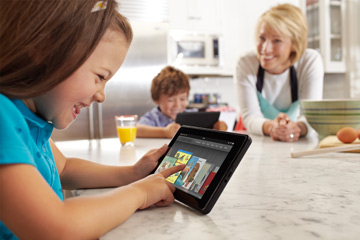 Amazon customized its interface to be a user-friendly experience for consuming content.
Courtesy Amazon.com Inc.

The Kindle Fire's operating system does some important work. It's a layer of software that maps commands to the Kindle Fire's hardware. It bridges the gap between software and the physical layer of electronics that produces results. It also acts as the user interface for the Kindle Fire. It needs to be robust and user friendly.

Amazon chose the Android operating system to be the basis for the Kindle Fire. But the version of Android you'll find on Amazon's tablet isn't the same as the one in other Android devices. It's a highly customized variation of Android 2.3, also known as Gingerbread. Amazon used Gingerbread as the foundation for its tablet and developed from there. The Kindle Fire looks and behaves differently compared to other Gingerbread tablets.

For those with a little experience in taking administrative control over devices, also known as rooting, the Kindle Fire creates the opportunity to own a relatively inexpensive Android tablet. It's possible to root the device and load a different version of Android on the tablet. This will effectively wipe out the Amazon functionality of the Kindle Fire and replace it with the Google suite of apps and features.

One specialized tool on the Kindle Fire is the Web browser. It's a specialized browser Amazon built called Silk. Silk takes advantage of Amazon's massive computers behind the scenes. It's called Amazon Web Services and the idea is that these computers do the heavy lifting of loading and caching Web pages so that the Kindle Fire doesn't need to do too much work. In theory, this speeds up page-loading times.

Amazon also supports the Kindle Fire through the use of cloud storage. Although the Kindle Fire has 8 gigabytes of memory -- a small amount compared to some other tablets -- Amazon offers free online storage of media purchased from Amazon. Your books, movies and music won't live on the Kindle Fire -- they'll be in the cloud. You can store things temporarily on your tablet and replace them whenever you like, knowing that a version of the deleted material will still be alive and well in the cloud.

Amazon Prime members get some bonus features with the Kindle Fire. One is access to the lending library, a service that lets you borrow a selection of books from Amazon's massive electronic library. Another perk is the ability to watch streaming television shows and movies through Prime Video. Purchasing a Kindle Fire gives you one month's free access to the Prime service. After that, you'll need to pony up a yearly fee of $79 to remain a member.

Perhaps the Kindle Fire's biggest selling point is the fact that you can buy so much content directly from Amazon. The company offers up thousands of music files, movies, television shows, magazines and books. And with Amazon as both content and hardware provider, the integration of purchase services makes it easy to buy lots of content right away.

Companies like Google and Apple also have their own media-store solutions. But Amazon has one of the largest libraries of media content online and campaigns hard to keep prices low for customers. This stance puts Amazon at odds against the publishing industry. It's an ongoing battle between protecting the rights of a major business sector and meeting the needs of customers.

Another big advantage of the Kindle Fire over other devices is its relatively low price. It's significantly less expensive than the base model of Apple's iPad. Amazon may even be taking a loss on the sale of the device. Research firm IHS estimated that it cost $201.70 US to manufacture a single Amazon Kindle Fire tablet. The selling price for the Kindle Fire as of this writing is $199 [source: Svensson].

Why would Amazon sell its hardware at a loss? Part of the reason is that it's hard to compete against the iPad, a device that succeeded where other tablets failed. By pricing the Kindle Fire significantly below the iPad, Amazon created an attractive alternative for people who may not have a lot of money to spend on electronics. But the main reason comes back to content. The Amazon Kindle Fire is essentially a conduit for Amazon content. Amazon could make up the loss in sales by selling movies, books and more to Kindle Fire owners.

Today, the Kindle Fire is in an increasingly competitive market. Apple still rules the roost with the iPad. But other Android tablets have seen some success as well. Google's Nexus 7 tablet launched at the same price point as the Kindle Fire, but with beefier hardware and a higher-resolution screen. And Microsoft's announcement of its Surface Tablet introduced another competitor in the space. Has the Kindle Fire lost its spark, or will an update to the hardware keep the embers burning for Amazon? One thing is likely -- the company will make sure it doesn't disappear in a puff of smoke.

The Kindle Fire proved that the 7-inch (17.8-centimeter) form factor for tablets is a viable option. It also showed that there is a ready audience for lower-priced tablets as long as they have the right features. In many ways, the Kindle Fire isn't a direct competitor with the iPad. But with new tablets in the market now and on the horizon, the Kindle Fire actually faces some tough opponents. I'm excited to see what Amazon has in store for us next.