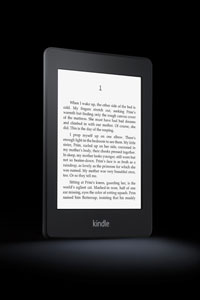 The front-lit screen on the Paperwhite is made of three layers: the E Ink display, the capacitive touch screen and the light guide.
Image courtesy of Amazon.com, Inc.

The most innovative thing about the Kindle Paperwhite is the front-lit screen with what Amazon is calling "light guide" technology. The display is made up of three layers: the E Ink display (innermost), the capacitive touch screen (middle) and the light guide (outermost) layers. The display layer is similar to previous Kindle displays, but with improved resolution and contrast. The multi-touch screen is a step up from the Kindle Touch's infrared (IR) touch screen. And the light guide is something new altogether.

There are four tiny LEDs built into the bezel at the bottom of the device's screen. These tiny lights point toward the display, and the light guide layer disperses the light across the entire screen. This top layer has been described by Amazon as being akin to a fiber optic cable flattened out into a sheet. It's imprinted with what they refer to as "nanoscale optical diffractive patterns" that direct the light across the screen and cause it to come out in certain areas, distributing it as evenly as possible downward onto the display. The imprinted guide pattern changes as it travels away from the light source in a way that ensures near-uniform distribution despite the fact that it's all coming from the bottom of the screen.

Lights usually prove to be a power drain, but battery life has been preserved by using low-power LEDs and engineering the device to use them efficiently. You can choose from 24 different levels of brightness, and even at the lowest, the lights are still on. The LEDs only go off when you turn the device off. This illumination allows you to use the Kindle Paperwhite in a number of settings, from bright outdoor sunlight to complete and utter darkness and everything in between. No other device on the market as of spring 2013 has a screen quite like it, although there are other e-readers with lit screens.

Amazon and fans of the technology contend that E Ink displays are easier on the eyes than back-lit LCD screens, which generally have LEDs that shine light toward your eyes. Amazon also states that the Paperwhite preserves the more paper-like nature of E Ink because the light guide shines the light inward toward the screen instead of outward. Anecdotally, people do find E Ink, as well as this front-lit screen, more pleasant and comfortable to view than a typically back-lit tablet. But there is still some debate on the matter, and studies haven't yet found a definite link between LCD screens and eyestrain. Modern LCD screens apparently refresh at a rate faster than our eyes can even detect. Some people report having no more trouble reading on LCD tablets than they do on the computer screens that they stare at daily. And a recent study found that reading on E Ink and LCD devices produced similar eyestrain results, and that image quality and resolution might have more effect on eye fatigue levels than type of display [sources: Hoffelder, Siegenthaler].

Tablets, however, are more subject to glare due to their glossy screens, making bright-light reading difficult. In many cases, the reading comfort level of different types of devices might just boil down to things like photosensitivity, glare and personal preference.