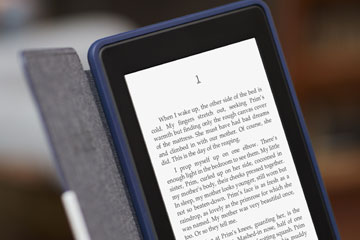 The Paperwhite’s screen is designed to be easier on the eyes, thanks to reduced glare. Whether reader eye strain is reduced is still up for discussion, though.
Image courtesy of Amazon.com, Inc.

Imagine you are on vacation, lying on the beach and not in the mood for a swim. You thought you wanted to read the latest Nicholas Sparks novel, but now you are in the mood for Toni Morrison. An hour later you decide to switch to the latest edition of Scientific American, and before you leave, you flip through a newspaper. In the past, your finicky reading habits would have weighed down your beach bag. But now, you can carry a single e-reader with you that's roughly the weight of a paperback.

Paper books certainly have their charm, but multiples can be cumbersome. On your typical modern e-reader, you can carry hundreds of books with you at once and flip from one to another at will. They even save your place.

Now that many of us are carrying around tiny computers in our pockets in the form of smartphones that can do much more than display text, e-readers are no longer exciting new technology. Most of these phones even have multiple e-reader apps from which to choose. But a dedicated e-reader can be a great pleasure to an avid devourer of the written word, especially one who prefers ink on paper to the computer screen. E-readers that use E Ink display technology are known for mimicking the look and reflective properties of paper more closely than a phone, tablet or computer screen does.

The Amazon Kindle e-reader has been around since 2007 and has had several facelifts since it was first introduced. As of spring 2013, the latest generation is the Kindle Paperwhite, released in October 2012. It is a step up from all Kindles before it in several ways. The most obvious change is the addition of a built-in light. All previous Kindle models (with the exclusion of the Fire, which is more akin to a tablet than an e-reader) required an external light source, just like you would need to read a regular book. But with Paperwhite, you can read anywhere under any lighting condition. You can resume your beach reading in the dark of your hotel room without having to turn on a lamp.

Read on to find out more about the features of Amazon's Kindle Paperwhite.