Differences Between Prior Kindles and Kindle Paperwhite 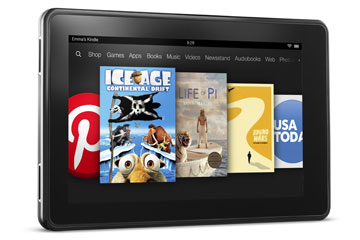 The Kindle Fire is Amazon’s horse in the consumer tablet race.
Image courtesy of Amazon.com, Inc.

As the name implies, the Kindle Keyboard 3G has a built-in physical keyboard. The cheapest base Kindle has a five-way controller underneath the screen for navigation. Both also have page forward buttons and page back buttons on either side of the device for flipping through reading material. Kindle Paperwhite eliminated all these buttons in favor of the touch-screen interface.

Kindle Touch was the first touch-screen Kindle, and Paperwhite has entirely replaced it. The Paperwhite has a two-point multi-touch capacitive touch-screen, whereas the Touch had a less responsive infrared (IR) touch-screen. The bezel is a little thinner on the Paperwhite because there is no longer the need for built-in IR transmitters to detect your hand motions on the screen. The new capacitive touch screen has more in common with the touch screens of most tablets, and is possibly the result of Amazon's acquisition of the multi-touch hardware manufacturer Touchco in 2009.

With the Paperwhite, the resolution jumped from the 600 by 800 pixels of all previous Kindles to a crisper 768 by 1024 pixels. Pixel density increased from 167 PPI to 212 PPI, about 62 percent more pixels than the Touch. Contrast has increased significantly from earlier models for sharper text and images. The number of fonts available increased from three to six.

The most obvious change is, of course, the lit screen, which no other Kindle has as of the Paperwhite's debut. Also, unlike previous models, the Paperwhite can switch between portrait and landscape views.

But not every change has led to a new capability. Kindle Paperwhite has lost the speakers and audio jack of previous models like the Kindle Keyboard 3G (still available), the Touch and some other discontinued models. This means you can no longer listen to audio books or have the device read the books to you digitally via a text-to-speech feature. Memory has also gone down a bit compared to the Touch and Keyboard, from 4GB to 2GB (or from 3 GB to 1.25 GB of user-available space).

Since the 5-way controller model was introduced, most Kindle models have also featured on-screen advertisements. While you can opt out of ads via payment, they mostly appear when you are not reading, so you can decide after a bit of use whether they annoy you enough to shell out more money.