How the Samsung Galaxy Tablet Works

Browse the article How the Samsung Galaxy Tablet Works 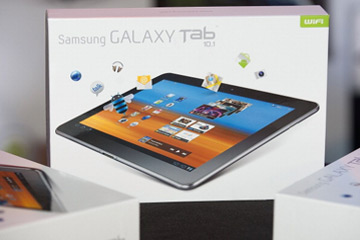 The Samsung Galaxy Tablet is a tablet computer that runs on Google's Android operating system. The original Galaxy had a seven-inch (17.8-centimeter) screen; the newer Galaxy 10.1 features a 10.1-inch (25.7-centimeter) screen. Some see it as the primary competitor to the Apple iPad in the tablet market. In fact, the company has sued Samsung in Europe to prevent sales of the Galaxy, claiming that it infringes on several of Apple's patents. At the moment, an injunction against sales of the Galaxy in Europe has been lifted (except in Germany), but the lawsuit itself has yet to be decided [source: Albanesius].

The Galaxy is essentially one large touchscreen, and the user interacts with it almost entirely by touching the screen itself, though it can dock to a keyboard or other peripherals. It's available in a WiFi only version, which can only connect to the Internet when an open wireless signal is in range. The Galaxy is also available in a 3G version that takes advantage of a cell phone service provider's broadband wireless data transmission network, though this comes with monthly data costs.

As of January 2011, Samsung had shipped 2 million Galaxy Tabs to retailers, though they did not release consumer sales figures [source: Ramstadl]. Android-based operating systems enjoyed 34 percent of the tablet market share after the first quarter of 2011, an increase of more than eight percent from the previous quarter [source: IDC]. While this increase doesn't reflect specific Galaxy sales numbers, it certainly shows that the Android tablet market has a strong future.

The 7-inch (17.8-centimeter) Samsung Galaxy Tablet has the following specifications:

The Samsung Galaxy Tablet 10.1 has the following specifications (note that there are two versions of the 10.1, called the 10.1 and the 10.1V. As CNET notes, they're nearly identical except that the 10.1V is slightly thicker and heavier and has a better rear camera):

The Galaxy Tab costs $350 for the WiFi- only version. The 3G version costs around $200 with a contract and data plan (which costs $30 per month and up), although price can vary depending on which service provider you go with.

Next, we'll see what accessories are available for the Samsung Galaxy Tablet. 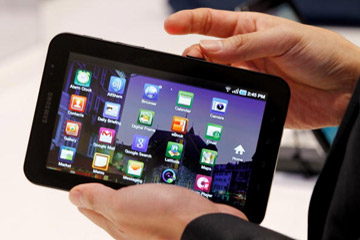 It may seem small, but don't worry -- the Samsung Galaxy Tablet comes with lots of bells and whistles.
Sean Gallup/Getty Images

There are lots of accessories available for the Samsung Galaxy Tablet. The most basic accessory is a cover -- Samsung sells several, and there are covers made by other manufacturers that fit the Galaxy as well. You can find them in leather, neoprene or other materials. The Galaxy is made with Corning Gorilla Glass, which uses a special manufacturing process to give the glass exceptional strength and resistance to cracks and scratches.

A keyboard dock lets you turn the Galaxy Tab into a small laptop computer. The Galaxy fits into the keyboard and sits upright (in landscape orientation), like the screen of a laptop. You can then use the keyboard to type and input text to any of the Galaxy's apps, such a word processor or email document. You could also use a Bluetooth keyboard.

An HDMI cable is a handy accessory because the Galaxy has an HDMI output. It sends full resolution high-definition video through this output, so if you have downloaded movies or TV shows onto your Galaxy, you can later view them on a full-size television.

The multi-media dock lets you use the Galaxy in a number of different ways. It charges while in the dock, and you could just set it to display a photo slideshow, turning it into a digital photo frame. You can watch movies or listen to music on the Galaxy instead, and send the sound out to a stereo system.

If you plan to use the Galaxy while driving, taking advantage of its abilities as a music player or the built-in access to Google maps and GPS navigation, there are some accessories that can make things easier. A vehicle mount lets you mount the Galaxy on the dashboard or windshield.

Of course, you'll also be able to find a wide range of adapters, chargers and other plugs and cables that will give your Galaxy more flexibility.