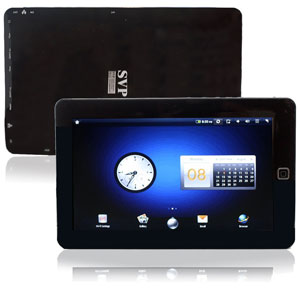 What's an SVP Tablet, and how does it compare to other tablets on the market?
Amazon.com

My 4-year-old daughter has a monopoly on my tablet. She launches apps to draw pictures, look at storybooks or complete puzzles, and when it's time to wind down before bed, streams the latest episodes of "Shaun the Sheep" or "Calliou" -- all while toting the tablet hither and yon.

More sophisticated than a mobile phone and not quite as capable as a laptop computer, the tablet continues to break technological ground. These wireless, easily portable touch-screen slates are used for gaming, reading, social networking and a host of other activities, including a number of personal and business applications. The technology targets a vast audience, and in the case of tablets offered by Silicon Valley Peripherals, zeros in on bargain-conscious consumers and companies rebranding electronics with their own logos.

Silicon Valley Peripherals (also known as Silicon Valley Imaging Corp.) of Fremont, Calif., was founded in 2003 as the U.S.-based offshoot of Digital Machine International Co. Ltd., a Taiwanese company that's been in operation since 2005. Tablets sold under the SVP brand are manufactured in China by Digital Machine International, and are designed to enter the consumer marketplace at attractively low prices that range from $75 to $200. Even at its most expensive, an SVP tablet is less than half the cost of an Apple iPad or a Samsung Galaxy; however, SVP tablets typically offer fewer features, which we'll discuss in more detail on the next page.

So, could my daughter bounce around the Web, listen to music and watch her favorite shows on an SVP tablet? Could you compose a business report or read the latest bestseller? The answers may just surprise you.

The 7-inch and 10-inch SVP tablets, the only two models currently offered by the company, share many similarities. Both use the same operating system (Android 2.1 or 2.2), have built-in wireless Internet capabilities, and rely on a touch-screen interface to browse the Web or launch apps.

The TPC7901 SVP 7-inch tablet features an 800 by 480 dots-per-inch (dpi) display, which is a lower resolution than you'll find in a BlackBerry Playbook 7-inch tablet screen. For example, at 1024 by 600 pixels, images on the Blackberry Playbook's screen are sure to appear sharper than they will on the SVP tablet display. The TPC7901's 1 GHz processor is capable, although not leading edge; some users report slow download speeds and a lag when accessing Internet sites.

When it comes to memory, the SVP 7-inch tablet includes DDRS 256MB/2GB MLC internal memory and a microSD card with up to 32 GB for external memory (the microSD card must be purchased separately). Both are adequate for performing most tablet tasks, and the DDRS memory uses less battery power than its predecessors. In addition, the TPC7901 has two mini-USB connections, and jacks for earphones, chargers and HDMI connectors [source: SVP].

Like the 7-inch model, the 10-inch TPC1013 offers a microSD card slot and a similar screen resolution, memory and operating speed. The primary difference between the 7-inch and 10-inch SVP tablets models is the size of each screen and the tablet's overall weight. The 10-inch TPC1013 weighs slightly more than the 7-inch TPC7901's 1.33 pounds. Both come with a one-year limited warranty. However, consumers cataloging their experiences with the company on review Web sites report difficulty finding replacement cords or accessories; many also report a lack of response when seeking technical support from SVP. On Feb. 29, 2012, the Better Business Bureau revoked the company's accreditation, citing SVP's "failure to respond to one or more customer complaints filed with the BBB" [source: Better Business Bureau]. 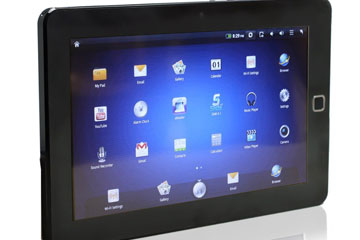 Make sure you check your tablets memory capability.
Amazon.com

What's more fun than a tablet? Figuring out what you can do with it. Before you delve in to downloads and apps, though, it's a good idea to check out your tablet's memory capabilities. The SVP 7-inch tablet, TPC7901, and the SVP 10-inch tablet, TPC1013, both have 2GB internal memory, which means the tablet can hold about 500 songs -- but not much else. The option to add a 32GB microSD card will boost the tablet's memory power, but don't expect to use the tablet as a repository for your albums or e-books [source: Gronot]. This tablet's memory (or its 10-inch cousin) just can't handle it. One way around this is to add an aftermarket Wi-Fi hard drive, such as Seagate GoFlex, but this can up your price by about $200.

Although the SVP tablets run on Android operating systems, don't expect to gain access to Google's Android Marketplace. Instead, the tablets offer access to apps through SlideME Marketplace, an application store headquartered in Seattle, Wash., and founded in 2008. Alternatively, users can download Android apps from other stores, such as Amazon Appstore (only available in the U.S.), GetJar or AppBrain [source: Hoffman].

Like other tablets, users can download and listen to music on SVP tablets, which support MP3, WAV, WMA, AAC and AAC+ audio files. The SVP tablets also serve as electronic book readers, adding to their suite of uses.

Silicon Valley Peripherals also manufactures and sells dedicated eReaders. The SVP EB701, for example, retails for $85. It features a 7-inch color, anti-glare LCD display and supports a number of book formats, including .txt, .doc and epub. The EB701 also has music download and playback capabilities [source: SVP]. Although they cost slightly more, the SVP 7-inch and 10-inch tablets can do this and more, so if you're looking for a way to play apps, listen to music -- and read e-books -- stick with a tablet.

You've probably heard of the iPad, but now that a host of other companies are making their way into the tablet market, there are more options than ever. And there's only one expert you can turn to for advice: yourself. Trust me, you are your own best tech consultant -- at least when it comes to deciding which tablet to buy. Like me, you may not be a techie by day, but you can certainly become one by night (or whenever you have free time). You're the best person to determine whether you'll use the tablet for your musical library, your e-book collection, creating graphic-rich documents for work (or play) or goofing around with all the games you can handle. Once you determine this, it makes your next decisions easier. You'll know whether you need a ton of memory or speed, or high-resolution screen for stellar graphics -- or whether a more basic model will fit the bill.