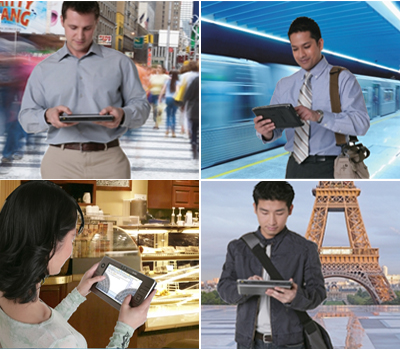 The UMPC is unique in that it runs regular Windows OS -- it currently runs Vista and a suite of software called Origami Experience [source: Microsoft]. While there are many PDAs and PDA/phone combinations that run Windows Mobile (such as the Palm Treo 700w) it isn't the same as running the stock XP OS loaded onto millions of desktop and laptop computers. Windows Mobile requires new versions of applications to be compatible with that OS, and the applications have to take advantage of the smaller screens on these devices. The goal of UMPC is to run off-the-shelf Windows applications, with no medications whatsoever other than supporting the tablet/touch screen features.

The UMPCs that Microsoft announced are small devices -- they weigh less than two pounds and have seven-inch video screens. This puts it in a new market segment not currently served by any particular manufacturer. It is smaller than the smallest tablet PCs that are currently available from Motion and Fujitsu, and lighter than the Aopen MiniPC (a desktop model that doesn't include any screen at all). It is also bigger than the OQO PC. The other distinction is that the UMPC will be less expensive than the typical tablet.

"Origami isn't an iPod killer per se, it's rather a new class of device that will compete with other devices that cost about the same," says Michael Gartenberg, an analyst at Jupiter Research, using the original code name for the UMPC. "That means portable media players, game machines, GPS units and the like will face some new challenges. Much like there were PCs with TV tuners long before MCE, the power of MCE was really the 10-foot UI. The power of Origami is really in the 10" UI."