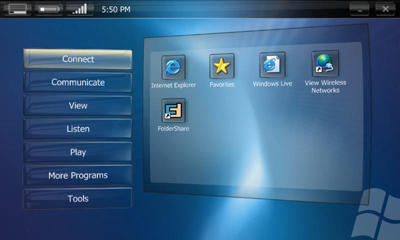 Microsoft has developed a special series of operating system enhancements to the tablet OS to take advantage of the UMPC platform. Called the "Touch Pack," these enhancements will optimize the touch screen experience. It has five applications: a program launcher, a series of touch improvements to the normal Windows UI, a Brilliant Black skin for Media player, a Sudoku game, and Dial Keys, a thumb-based on-screen keyboard for inputting text.

"Currently the Touch Pack is available only to UMPC qualified computers and only as an OEM pre-install," says Hubbard. "The Touch Pack was designed specifically for small form factor PCs."

Microsoft's Mitchell says, "Microsoft Touch Pack for Windows XP software optimizes the touch screen user interface for UMPCs to simplify navigation and ease-of-use while on the go. The Touch Pack's customizable Program Launcher organizes software programs into categories, and uses large buttons and icons to make it easy to find and open your favorite applications."

Most of the marketing materials that show screen shots of the UMPC feature views of this application.

There are several components to the Touch Pack. The first one is "Touch Improvements." This utility makes about 10 different settings changes to Windows such as widening the scroll bars and enlarging the minimize and maximize buttons, shows folders in thumbnail view. Next is a new skin for Windows Media Player called "Brilliant Black." This skin fills the screen on the devices with large buttons to navigate the media controls such as play, stop and volume.

The third Touch Pack program is "DialKeys." This program, built by Fortune Fountain Ltd., is a way to input text with your thumbs. Dial Keys makes it easy to enter URLs, e-mail addresses, et cetera.

"DialKeys basically takes a standard QWERTY keyboard layout and splits it in two halves. It's a little hard to describe the layout but there are lots of screen shots of DialKeys to show what it looks like. The basic idea is that you hold the device in two hands and use your thumbs on the screen to type in text. It takes a little getting used to, but people are always amazed once they use it a day or two how good they get at typing with it," says Hubbard on his blog.

The final product in the Touch Pack is a Sudoku game. The version is optimized for touch and the pen.

Next, we'll look at who will be manufacturing the UMPC and how much it's likely to cost. ­