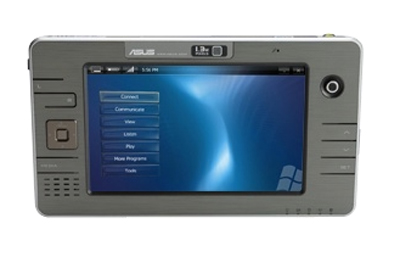 UMPCs from Samsung, Asus, and Founder are based on Intel microprocessors. PaceBlade Japan announced a UMPC, known as the SmartCaddie, that uses a VIA Technology chip.

Samsung's Q1 went on sale in the second quarter of 2006 with a manufacturer's suggested retail price of $1,099. Another UMPC, manufactured by AMtek and available the United States as the TabletKiosk eo v7110, retails for $899. Asus' and Founder's UMPC should be available later this year. One vendor that hasn't announced any UMPC yet is Motion Computing, although the company sells a variety of tablet PCs in various shapes and sizes.

"We see it as validation and reinforcement of where we were headed with tablet PCs," says Bert Haskell of Motion Computing. "We were drawn into the ultra-mobile tablets by our customers who wanted a higher level of mobility. It is nice to see that Microsoft is creating the same type of vision for a consumer-oriented product."

Motion sells its tablets for the enterprise, and through the reseller channel, largely aimed at equipping sales forces and hospital staffs. "We have a significantly different focus in that we are looking at high-powered enterprise computing," says Haskell. Motion sells their tablets with higher-end components, such as with Pentium M CPUs and 60 GB hard disks with 1GB of RAM. " We are set up to understand and service the needs of the enterprise customers. We don't currently target consumer markets. If and when we decide to make that transition, it would be a pretty significant change for us," he said.

Microsoft has promised that once Vista ships that the UMPC will be able to run some version of Vista as well, but since the new OS isn't yet finished it is hard to make any definitive claims in this area. "The Vista requirements aren't out yet, but realistically if the units have the hardware specifications that Vista requires they should be able to run it," says Microsoft's Hubbard.

Just because the UMPC runs the tablet version of XP doesn't mean that every tablet-based application is worth running on it, however. "To be clear though not all tablet-enabled apps will make sense on a UMPC and not all UMPC apps will make sense on a traditional tablet," says Hubbard. "The small form factor and touch interaction of UMPC means that to have a really great user experience you need to design your UI to really take advantage of those assets." So chances are if UMPCs do take off, we will see differentiated applications over time that take advantage of its touch-screen features and enhancements that Microsoft is building into the units.

UMPCs overall are expected will cost less than most tablets and more than most PDAs. It depends on what configurations the various vendors will initially offer and how they will be priced in local markets. Price is definitely an issue that has gotten some analysts going about the new units.

"To me, one of the most important things about this, is price," stated Bob O'Donnell, program vice president for clients and displays at IDC. "If it's under $500, it's a fancy gadget. People spend that much on iPods. So there's this sense that, at a low price point, it could be very interesting and very appealing. Think about all the free WiFi networks that are out there now that you could use this thing with, and it gives you a full browsing experience as opposed to trying to browse on a two-inch cell phone, which is a horrendously useless experience. And yet people are getting more and more used to having information access almost anywhere they are, at almost any time."

Scott Fulton of TGDaily.com, sums things up the best about UMPC's shortcomings: "But what we have instead is something that's larger than the average pocket, that can't dial out, that doesn't have a discrete way to connect to the outside world, is somewhat expensive, and perhaps most unanticipated of all, is power-hungry."

So what will happen with the UMPC? Only time will tell. If manufacturers can get several hours of battery life, if the costs can drop way below $1000, if the touch experience works out for many new users, and if the right distributors pick up the products, this could be a winning product for Microsoft and its OEMs. Hitting all of these targets won't be easy, to be sure. But there is plenty of interest in UMPC and the size of the devices is very appealing.