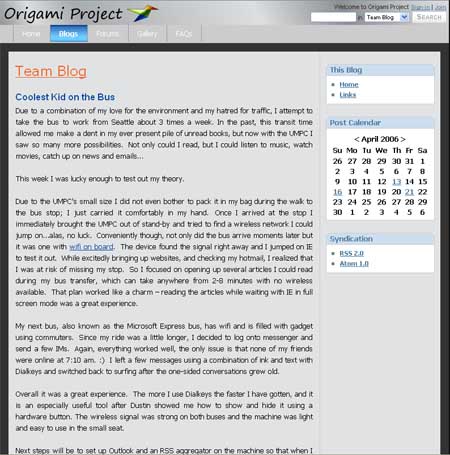 Microsoft is a marketing machine, and it took over a year to build a credible marketing campaign for the UMPC. They used a combination of blogs, messages at v­arious Bill Gates keynotes and a short video showing off a concept of the UMPC that was widely distributed -- unintentionally, it seems.

As we said earlier, "Origami" was the codename that Microsoft used for the project prior to the announcement at CeBIT, but it has proved so popular that many vendors continue to refer to UMPCs by the code name, and Microsoft continues to use the name in its team blog and community site for the UMPC.

To take advantage of blogging's popularity, Microsoft used the team blog from various UMPC project members to build buzz and excitement over this new device. The blog was part of the viral marketing campaign, a way to build community and converge on solutions from a wide group of disparate players around a common platform. The team is still blogging away and the Web site has an active discussion forum debating various topics, including the features promised for the first several units.

In the Origami blog, Dustin Hubbard, Microsoft Mobile PC manager, stated: "When we came up with this idea a few months ago, this was intended to be a small, grassroots effort to generate some interest in the UMPC. Boy, did we do that! Overall, the campaign was successful beyond our wildest expectations and frankly maybe a little too successful."

According to the Microsoft project team, it was pure coincidence that they announced the UMPC on the same day of a big Apple announcement. When they settled on the announcement date of March 9, they needed two weeks prior to build up the buzz and that was the same date (February 23) that Apple picked for one of its announcements.

Part of the buzz centered on the "Digital Kitchen video" which was developed by the production group Digital Kitchen as a concept piece (and has since been removed from YouTube for violating its terms of use). This video was more than a year old by the time it got a lot of play in the press. It has many vague statements, with just a few close-ups of what appears to be the UMPC in various everyday uses, such as mixing music, playing games and drawing pictures. Microsoft originally intended it for internal Microsoft viewing only.

A scene in which a user appears to be playing the popular Halo video game on a UMPC-like device attracted the most attention. "The video, which was intended for viewing by Microsoft employees only, showed our ultimate goal of running all Windows software on this ultra-mobile form factor. However, in this first release, you'll probably be primarily limited to casual games," says Dustin Hubbard.

Microsoft says that the hype surrounding the video was completely unexpected. Hubbard writes in the UMPC blog: "No one at Microsoft even knew that video was publicly available until someone posted it after finding it by doing an Internet search. Both of those events may have turned out to be serendipitous I suppose, but it wasn't planned if I'm being honest. The discovery of the video was what took our buzz campaign from a tech enthusiast following to mainstream media."

For lots more information on the Ultra-mobile PC, check out the links below.