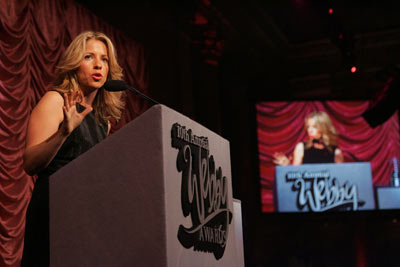 Let's start with some Webby history. The Webby Awards made their debut in 1996, long before the Internet was as prevalent as it is today. A magazine called The Web used donations to fund the awards, which recognized sites in 15 categories. Around 700 people attended the first Webby Awards ceremony, which was held at a San Francisco nightclub.

The Webby Awards grew in tandem with the dot-com bubble. In 2000, about 3,000 people attended the awards ceremony at the San Francisco Opera House. By 2002, after the collapse of the bubble, the size of the production had shrunk dramatically -- about 600 people attended the event, which was more like a conference than a flashy awards show. In 2003, the Webby Awards temporarily retreated to the virtual world, recognizing sites in 30 categories in an online ceremony.

As the industry recovered from the dot-com collapse, the Webby Awards started to grow again. The 13th annual awards, which took place in 2009, recognized winners from about 10,000 entries that came from more than 60 countries around the world [source: Webby Awards].

Today, the International Academy of Digital Arts and Sciences has more than 750 members, and the 2010 awards involved more than 100 categories. The winners aren't just be Web sites you can browse on your computer. The Academy expanded its scope, and it now recognizes the sites you can visit and services you can use from mobile devices. It also bestows awards in interactive advertising and online film and video.

Next, we'll look at how the academy selects all these winners and why winning the spiral statue is a prestigious honor.