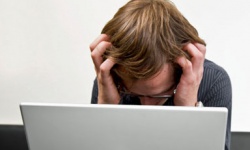 There's nothing quite like finding out your computer has a serious virus.
@iStockphoto.com/Olaf Loose

­­Computer viruses can be a nightmare. Some can wipe out the information on a hard drive, tie up traffic on a computer network for hours, turn an innocent machine into a zombie and replicate and send themselves to other computers. If you've never had a machine fall victim to a computer virus, you may wonder what the fuss is about. But the concern is understandable -- according to Consumer Reports, computer viruses helped contribute to $8.5 billion in consumer losses in 2008 [source: MarketWatch]. Computer viruses are just one kind of online threat, but they're arguably the best known of the bunch.

Computer viruses have been around for many years. In fact, in 1949, a scientist named John von Neumann theorized that a self-replicated program was possible [source: Krebs]. The computer industry wasn't even a decade old, and already someone had figured out how to throw a monkey wrench into the figurative gears. But it took a few decades before programmers known as hackers began to build computer viruses.

While some pranksters created virus-like programs for large computer systems, it was really the introduction of the personal computer that brought computer viruses to the public's attention. A doctoral student named Fred Cohen was the first to describe self-replicating programs designed to modify computers as viruses. The name has stuck ever since.

­In the good­ old days (i.e., the early 1980s), viruses depended on humans to do the hard work of spreading the virus to other computers. A hacker would save the virus to disks and then distribute the disks to other people. It wasn't until modems became common that virus transmission became a real problem. Today when we think of a computer virus, we usually imagine something that transmits itself via the Internet. It might infect computers through e-mail messages or corrupted Web links. Programs like these can spread much faster than the earliest computer viruses.

We're going to take a look at 10 of the worst computer viruses to cripple a computer system. Let's start with the Melissa virus.