by Jonathan Strickland
Prev NEXT
9 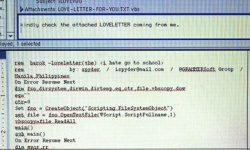 A year after the Melissa virus hit the Internet, a digital menace emerged from the Philippines. Unlike the Melissa virus, this threat came in the form of a worm -- it was a standalone program capable of replicating itself. It bore the name ILOVEYOU.

The ILOVEYOU virus initially traveled the Internet by e-mail, just like the Melissa virus. The subject of the e-mail said that the message was a love letter from a secret admirer. An attachment in the e-mail was what caused all the trouble. The original worm had the file name of LOVE-LETTER-FOR-YOU.TXT.vbs. The vbs extension pointed to the language the hacker used to create the worm: Visual Basic Scripting [source: McAfee].

According to anti-virus software producer McAfee, the ILOVEYOU virus had a wide range of attacks:

Who created the ILOVEYOU virus? Some think it was Onel de Guzman of the Philippines. Filipino authorities investigated de Guzman on charges of theft -- at the time the Philippines had no computer espionage or sabotage laws. Citing a lack of evidence, the Filipino authorities dropped the charges against de Guzman, who would neither confirm nor deny his responsibility for the virus. According to some estimates, the ILOVEYOU virus caused $10 billion in damages [source: Landler].

Now that the love fest is over, let's take a look at one of the most widespread viruses to hit the Web.

As if viruses, worms and Trojan horses weren't enough, we also have to worry about virus hoaxes. These are fake viruses -- they don't actually cause any harm or replicate themselves. Instead, the creators of these viruses hope that people and media companies treat the hoax as if it were the real deal. Even though these hoaxes aren't immediately dangerous, they are still a problem. Like the boy who cried wolf, hoax viruses can cause people to ignore warnings about real threats.