by Jonathan Strickland
Prev NEXT
8 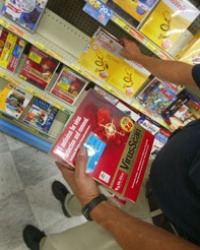 Fortunately for consumers, there's no shortage of antivirus software suites on the market.
Joe Raedle/Getty Images

The Klez virus marked a new direction for computer viruses, setting the bar high for those that would follow. It debuted in late 2001, and variations of the virus plagued the Internet for several months. The basic Klez worm infected a victim's computer through an e-mail message, replicated itself and then sent itself to people in the victim's address book. Some variations of the Klez virus carried other harmful programs that could render a victim's computer inoperable. Depending on the version, the Klez virus could act like a normal computer virus, a worm or a Trojan horse. It could even disable virus-scanning software and pose as a virus-removal tool [source: Symantec].

Shortly after it appeared on the Internet, hackers modified the Klez virus in a way that made it far more effective. Like other viruses, it could comb through a victim's address book and send itself to contacts. But it could also take another name from the contact list and place that address in the "From" field in the e-mail client. It's called spoofing -- the e-mail appears to come from one source when it's really coming from somewhere else.

Spoofing an e-mail address accomplishes a couple of goals. For one thing, it doesn't do the recipient of the e-mail any good to block the person in the "From" field, since the e-mails are really coming from someone else. A Klez worm programmed to spam people with multiple e-mails could clog an inbox in short order, because the recipients would be unable to tell what the real source of the problem was. Also, the e-mail's recipient might recognize the name in the "From" field and therefore be more receptive to opening it.

It's important to have an antivirus program on your computer, and to keep it up to date. But you shouldn't use more than one suite, as multiple antivirus programs can interfere with one another. Here's a list of some antivirus software suites:

Several major computer viruses debuted in 2001. In the next section, we'll take a look at Code Red.