by Jonathan Strickland
Prev NEXT
7 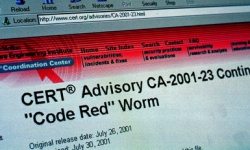 The CERT Coordination Center at Carnegie-Mellon university published an advisory alerting the public to the dangers of the Code Red virus.
Chris Hondros/Getty Images

­The Code Red and Code Red II worms popped up in the summer of 2001. Both worms exploited an operating system vulnerability that was found in machines running Windows 2000 and Windows NT. The vulnerability was a buffer overflow problem, which means when a machine running on these operating systems receives more information than its buffers can handle, it starts to overwrite adjacent memory.

The original Code Red worm initiated a distributed denial of service (DDoS) attack on the White House. That means all the computers infected with Code Red tried to contact the Web servers at the White House at the same time, overloading the machines.

A Windows 2000 machine infected by the Code Red II worm no longer obeys the owner. That's because the worm creates a backdoor into the computer's operating system, allowing a remote user to access and control the machine. In computing terms, this is a system-level compromise, and it's bad news for the computer's owner. The person behind the virus can access information from the victim's computer or even use the infected computer to commit crimes. That means the victim not only has to deal with an infected computer, but also may fall under suspicion for crimes he or she didn't commit.

While Windows NT machines were vulnerable to the Code Red worms, the viruses' effect on these machines wasn't as extreme. Web servers running Windows NT might crash more often than normal, but that was about as bad as it got. Compared to the woes experienced by Windows 2000 users, that's not so bad.

Microsoft released software patches that addressed the security vulnerability in Windows 2000 and Windows NT. Once patched, the original worms could no longer infect a Windows 2000 machine; however, the patch didn't remove viruses from infected computers -- victims had to do that themselves.

What do I do now?

What should you do if you find out your computer has been hit with a computer virus? That depends on the virus. Many antivirus programs are able to remove viruses from an infected system. But if the virus has damaged some of your files or data, you'll need to restore from backups. It's very important to back up your information often. And with viruses like the Code Red worms, it's a good idea to completely reformat the hard drive and start fresh. Some worms allow other malicious software to load onto your machine, and a simple antivirus sweep might not catch them all.