by Jonathan Strickland
Prev NEXT
2 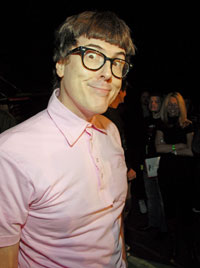 We can thank "Weird Al" Yankovic for warning us of the dreaded "Stinky Cheese" virus.
Kevin Mazur Archive 1/WireImage/Getty Images

Maybe you've seen the ad in Apple's Mac computer marketing campaign where Justin "I'm a Mac" Long consoles John "I'm a PC" Hodgman. Hodgman comes down with a virus and points out that there are more than 100,000 viruses that can strike a computer. Long says that those viruses target PCs, not Mac computers.

For the most part, that's true. Mac computers are partially protected from virus attacks because of a concept called security through obscurity. Apple has a reputation for keeping its operating system (OS) and hardware a closed system -- Apple produces both the hardware and the software. This keeps the OS obscure. Traditionally, Macs have been a distant second to PCs in the home computer market. A hacker who creates a virus for the Mac won't hit as many victims as he or she would with a virus for PCs.

But that hasn't stopped at least one Mac hacker. In 2006, the Leap-A virus, also known as Oompa-A, debuted. It uses the iChat instant messaging program to propagate across vulnerable Mac computers. After the virus infects a Mac, it searches through the iChat contacts and sends a message to each person on the list. The message contains a corrupted file that appears to be an innocent JPEG image.

The Leap-A virus doesn't cause much harm to computers, but it does show that even a Mac computer can fall prey to malicious software. As Mac computers become more popular, we'll probably see more hackers create customized viruses that could damage files on the computer or snarl network traffic. Hodgman's character may yet have his revenge.

We're down to the end of the list. What computer virus has landed the number one spot?

While computer viruses can pose a serious threat to computer systems and Internet traffic, sometimes the media overstates the impact of a particular virus. For example, the Michelangelo virus gained a great deal of media attention, but the actual damage caused by the virus was pretty small. That might have been the inspiration for the song "Virus Alert" by "Weird Al" Yankovic. The song warns listeners of a computer virus called Stinky Cheese that not only wipes out your computer's hard drive, but also forces you to listen to Jethro Tull songs and legally change your name to Reggie.