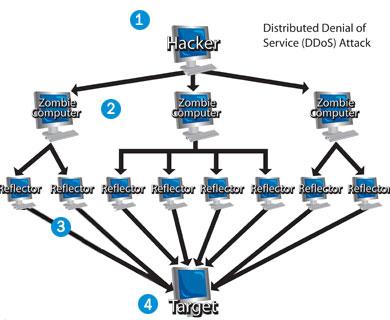 Sometimes a cracker uses a network of zombie computers to sabotage a specific Web site or server. The idea is pretty simple -- a cracker tells all the computers on his botnet to contact a specific server or Web site repeatedly. The sudden increase in traffic can cause the site to load very slowly for legitimate users. Sometimes the traffic is enough to shut the site down completely. We call this kind of an attack a Distributed Denial of Service (DDoS) attack.

Some particularly tricky botnets use uncorrupted computers as part of the attack. Here's how it works: the cracker sends the command to initiate the attack to his zombie army. Each computer within the army sends an electronic connection request to an innocent computer called a reflector. When the reflector receives the request, it looks like it originates not from the zombies, but from the ultimate victim of the attack. The reflectors send information to the victim system, and eventually the system's performance suffers or it shuts down completely as it is inundated with multiple unsolicited responses from several computers at once.

The list of DDoS attack victims includes some pretty major names. Microsoft suffered an attack from a DDoS called MyDoom. Crackers have targeted other major Internet players like Amazon, CNN, Yahoo and eBay. The DDoS names range from mildly amusing to disturbing:

Once an army begins a DDoS attack against a victim system, there are few things the system administrator can do to prevent catastrophe. He could choose to limit the amount of traffic allowed on his server, but this restricts legitimate Internet connections and zombies alike. If the administrator can determine the origin of the attacks, he can filter the traffic. Unfortunately, since many zombie computers disguise (or spoof) their addresses, this isn't always easy to do.

In the next section we'll look at some other ways crackers use zombie computers.

On May 4th, 2001, a 13-year-old cracker used a denial of service attack to bring down GRC.com, the Web site for Gibson Research Corporation. Ironically, GRC.com focuses on Internet security. In 2006, police in Hanoi, Vietnam arrested a high school sophomore for orchestrating a DDoS attack on a Web site for the Nhan Hoa Software Company. He said the reason he did it was because he didn't like the Web site.