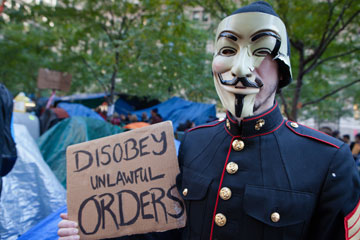 An Occupy Wall Street protester in Zuccotti Park on Oct. 30, 2011, the day after a nor'easter storm blanketed the area in snow.
©Julie Dermansky/Julie Dermansky/Corbis

But what is Anonymous, exactly? To be clear, Anonymous is not a well-defined group of computer hackers. It's not a club of anti-social geeks hiding in their parents' basements or well-trained, militaristic outlaws hiding in shadowy bunkers equipped with high-speed Internet access.

Depending on who you ask, Anonymous is a digital consciousness, a worldwide hive mind, a culture, a political and social movement or an online collective. It's really all of the above. Anonymous is a massive group of users of varying computing abilities who have a lot in common. As with any subculture, Anonymous didn't spring forth from a single moment. It developed slowly over time.

It began in 2003 on 4chan, a so-called image board, which is an Internet discussion forum where users post images on just about any topic you can imagine (including some you don't want to imagine). Here, people share anything that's on their minds with zero self-censorship, in part because they can and do post anonymously.

Because you're reading this information on a family-friendly Web site, it's worth noting that 4chan is anything but family-friendly. And in fact, that's exactly how the denizens of 4chan like it. The often over-the-top and obscene language, personal attacks and roughhouse atmosphere act as filter to repel entire swaths of the Internet population.

4chan is infamous in part for its love of lulz (a derivative of LOL, or laugh out loud), the biting, sometimes vengeful laughter earned at the expense of someone else. To get lulz, 4chan lovers will do just about anything, from stooping to the lowest and crudest form of personal insults to reaching for more sophisticated and coordinated trickery that may or may not involve computer hacking.

Most of the time, these pranks are short-lived, pointless and quickly forgotten. The whole point, in fact, is to not take anything too seriously.

But as 4chan evolved, some users saw possibilities for achieving bigger and more elaborates schemes beyond sophomoric practical jokes. These people gravitated from the image board towards IRC (Internet relay chat) systems, where they could communicate more quickly and exchange more detailed information.

It's in this environment that Anonymous began its slow and often fractious rise. There are many splinter groups within Anonymous, all with various causes that may or may not gain traction. But they all have many things in common. There are no leaders. Although some people take on organizational roles, there is no established hierarchy. Everyone is considered equal. Anyone on the planet can be Anonymous. And to be truly considered a part of Anonymous, you must take real and definitive action to help a cause.

On the next page you'll see one of Anonymous's first accomplishments that really gathered widespread acknowledgement, to both cheers and jeers from people around the globe.