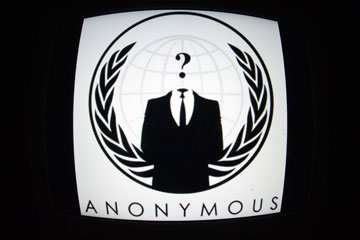 The Anonymous logo is a suited man with a question mark in place of a head.
© LIONEL BONAVENTURE/AFP/Getty Images

Organized actions from Anonymous became known as ops (short for operations). Some ops fizzle out before a single Web site is vandalized. Others result in online cataclysms that cause real-world financial and political upheaval to the dismay and delight of millions of people.

Anonymous achieved undeniable celebrity status in 2008. That year, a rather unflattering (and creepy) video of Tom Cruise rambling on about his Scientology beliefs was leaked to the Internet, to the anger of church leaders.

So the church attempted to do the impossible -- it tried to remove the video from the Internet. In doing so, they raised the ire of Anonymous, which saw these attempts as a form of censorship. Anons also took issue with the church itself, which it views as a money-grubbing cult.

Thus, Project Chanology was born. Anonymous gathered its collective abilities with the intention of removing the church from the Internet. In a move that would become a hallmark of Anonymous missions, the group broadcast its intentions in a YouTube video.

Then the project began, first as DDoS attack that interfered with the church Web site. Next, there were prank phone calls and orders for unpaid pizza sent to church offices all over the world -- anything to disrupt day-to-day functioning. Of course, these tactics weren't exactly legal, and as a result, risked sealing Anonymous' reputation as law breakers and vigilantes.

Then Anonymous had its moment of clarity, sparked by non-Anonymous Scientologist critic Mark Bunker, who pleaded with the group to use non-destructive and legal means to accomplish its ends.

Thanks to his suggestions, Anonymous shifted from illegal tactics to more legitimate actions, sending thousands of protesters out in front of the churches, all wearing Guy Fawkes masks, the likes of which have become a visual hallmark of Anonymous. These are the same masks worn by the lead character in the movie "V for Vendetta," in which an anonymous anti-hero takes on the powers that be.

During the Chanology ruckus, it became evermore clear that Anonymous was evolving beyond juvenile tricks. Anonymous was getting more serious, more focused and more powerful.

After nearly two years of intermittent pranks and hacking, Anons tired of Project Chanology and mostly ceased activities against the church. There were plenty of other targets out there, and Anonymous was just getting warmed up.