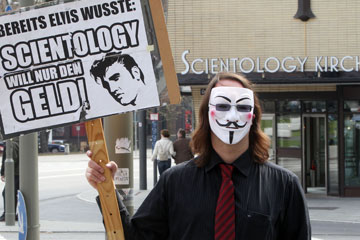 An Anonymous member protesting outside a Church of Scientology building in Hamburg, Germany in April 2012.
© Malte Christians/dpa/Corbis

You may question how supposedly faceless, nameless digital activists with no real affiliation or stated allegiance can really accomplish much of anything. Yet as so many people have learned, Anonymous leverages its virtual, digital power for real world results. No one is immune from an Anonymous attack. Mighty governments, humungous corporations, hate groups ... they have all witnessed the reach of Anons cooperating in teams.

For the voiceless and downtrodden, as well as anyone with a penchant for waving handwritten protest signs, Anonymous is a light in the darkness of what some may see as an oppressive New World Order controlled by the rich, powerful and immoral. For those on the other side, Anonymous is a band of vigilantes, anarchists or simply bored computer geeks with destructive streaks. To them, the group is an ominous threat, a sleeping digital dragon that, when awakened, can wreak immense damage.

Defining Anonymous as a group may be a bit misleading, because there's no membership application, no initiation rituals and no certification or diploma that confirms someone as Anonymous. But there are some very real behaviors and customs within Anonymous.

Anonymous has spawned a whole set of mores and social norms and quirks of language, much of it documented in the Encyclopedia Dramatica. This online archive is a sort of like a 101 course to the ins and outs of the Anonymous culture. Fair warning if you choose to venture to this online destination: It is an unfiltered site with graphic language.

While there is no standard rule set, there are rules of the Internet listed at Encyclopedia Dramatica. Rules such as No. 12, which is, "Anything can and will be used against you." And No. 33, "Lurk more, it's never enough." Other rules are stark reminders that Anonymous is not always on righteous, idealistic crusades. Rule No. 6 is, "Anonymous can be a horrible, senseless, uncaring monster." Keep reading and you'll see more about what this beast looks like when it's on the prowl.