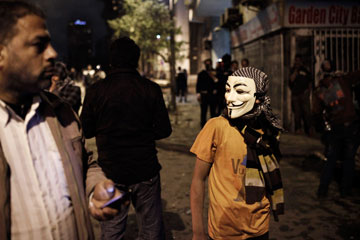 Bored with Scientology, Anonymous turned its collective attention towards other organizations. They attacked the Westboro Baptist Church (which is often classified as a hate group), defacing its Web site and posting messages of tolerance and peace [Source: Vice].

Many Anons were linked to the Occupy Wall Street protesters and encouraged participants to remain peaceful during their sit-ins and marches [Source: Guardian]. They've hunted child pornographers, helping to cripple associated Web sites and releasing the names of people who distributed these illegal images and videos [Source: Zdnet].

Anonymous often strikes government and commercial institutions, too. In one famous instance, they retaliated for government shutdowns of the Pirate Bay and Megaupload, which are Web sites that can be used to distribute movies, music and software. It wasn't that Anons were angry that they suddenly couldn't download music for free. It was that government authorities used the same kind of illegal DDoS attacks that hackers prefer. Only the people who instigated these attacks would ostensibly never face the kinds of criminal charges that any normal citizen would. The irony of the situation fueled outrage among Anons. In retaliation, they hacked the sites of the International Federation of the Phonographic Industry, the Motion Picture Association of America, the U.S. Department of Justice, the Federal Bureau of Investigation and many others [Source: Forbes].

As the Arab Spring sparked in Tunisia, Anons immediately decided to participate, encouraging protesters, coordinating communications and vandalizing Tunisian government Web sites to stoke the fires of revolution [Source: Al Jazeera]. They did the same in Egypt, Syria and other places where the revolution arose [Source: NBC News].

In 2012, in what they called retribution for mistreatment of Palestinians, Anons attacked a series of Israeli government sites, leaking passwords, private databases and much more [Source: TNW]. In 2013, when Indian authorities violently clamped down on political protesters in Kashmir, Anonymous disabled Indian military and polices sites [Source: Economic Times].

When a 16-year-old girl was allegedly sexually assaulted in Steubenville, Ohio in August of 2012, there was evidence to believe that local authorities attempted to protect the perpetrators. Anons in an offshoot group called Knight Sec launched a crusade to unveil the story and the cover-ups. It leaked photos of the assault, as well as a video of a man bragging about the incident -- and then publicized names of those involved, including two star players on the local high school football team [Source: The Nation].

As you can see, the reach of Anonymous is wide, and its operations, impactful. On the next page, you'll see more about how Anonymous gathers members into a workable collective.