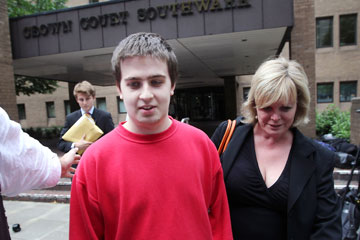 Ryan Cleary and his solicitor Karen Todner outside Southwark Crown Court by on June 27, 2011 in London, England. At that time, Mr. Cleary was charged with hacking into the U.K.'s Serious Organised Crime Agency.
©Peter Macdiarmid/Getty Images

You already know that Anons attempt to vet potential activists whenever they can. But although invitation-only chat systems may weed out a lot of wannabes and stalkers, it doesn't always work as intended.

Authorities and enemies of Anonymous infiltrate the group from time to time, much to the chagrin (or in Anon-speak, the "anti-lulz") of the group. And once in a while, prosecutors build solid cases that result in convictions.

In England in 2012, Ryan Cleary and Jake Davis were arrested for charges related to computer hacking in the name of an Anonymous splinter group called Lulz Security, or LulzSec. The two admitted to attacking computers belonging to the Pentagon, the U.S. Air Force, Nintendo, Sony and the Arizona State Police, among others [source: The Guardian].

There were dozens of other arrests of Anonymous members in 2012, too, all around the world. Most charges are related to Web site defacement, DDoS attacks or for publishing private information that was stolen and leaked to the wider world.

Many people within the Anonymous community took issue with those kinds of statements. They say they don't want ill-gotten financial rewards or justifiably classified information. Instead, they merely want to cast a ray of light on the germ-ridden and corrupt corners of our society.

Whether or not you agree with the methods and goals of Anonymous, you can bet that this collective of hacktivists isn't going away anytime soon. With every new exploit, Anonymous gains credibility, either as a threat or as a heroic initiative. That legitimacy means Anons are a cultural force that can and does make things happen.

So when government or authorities fail their citizens and journalists won't listen, there is still hope in Anonymous. And for the unfortunate people who intentionally or accidentally wind up in the crosshairs of an Anonymous op, their digital world will never again be the same.

Love them or hate them, Anons are a true world force that has serious implications for politics and economies everywhere. It is an equalizing force that has reach anywhere there's a computer network. No one can say whether that force will be for good or evil, but's probably safe to say that Anonymous will always be a bit of both – in other words, a digital manifestation of the human condition itself.